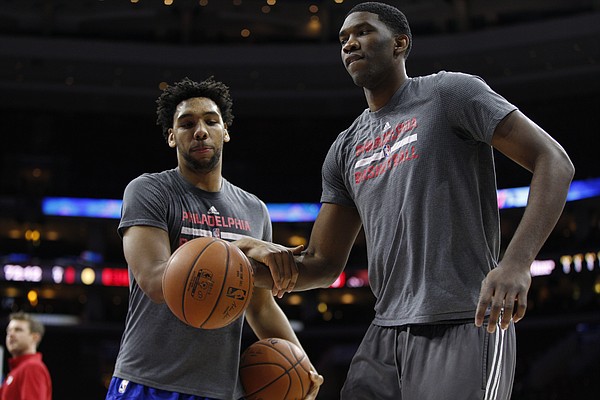 In the two-plus years since Joel Embiid left Kansas for the NBA, his injury-plagued career has kept him from playing any games for the Philadelphia 76ers. But the 7-foot-2 center from Cameroon somehow found a way to stay relevant in the league’s zeitgeist by becoming an internet/Twitter/Instagram star.

In particular, videos of Embiid going through basketball workouts during his rehab process became both wildly popular for fans of the Sixers and the young big man, while simultaneously serving as fodder for jokes about him never appearing in an actual professional game.

Well, The Ringer took the Embiid mythology to another level Wednesday, when Kevin O’Connor’s story on the 22-year-old prospect included a mockumentary on the former KU star.

Titled, “Joel Embiid: Legacy of a Legend,” the video includes such one-liners as:

“This is what watching Wilt Chamberlain in person must’ve felt like.”

“And there’s a revelation: Oh my God. LeBron James is trash.”

“Joel Embiid is one of the bravest men, probably on the face of the planet.”

Perhaps the jokes will stop this coming season, when Embiid is on schedule to make his NBA debut. Or perhaps more injury setbacks will continue to group the promising center with the likes of Greg Oden.

Some people think Embiid could win Rookie of the Year, and others will remain skeptical until he proves them wrong.

No matter where you stand on the Embiid debate, The Ringer’s video tribute is worth checking out.

— Watch the mockumentary below:

Rest assured, if he can stay healthy, the jokes will cease. And quickly. I do think the possibility exist his foot issues combined with size/weight/stress may spell the end of a promising career. It happens. If he stays healthy? That dude is a player whose upside is unlimited, with a mean streak to boot.

"If" times were different and he had played 3 to 4 years at KU (before the one-and-done era) and "if" he could remain healthy, I believe he could have been the best player to suit up for the Jayhawks since Danny Manning. One can only hope he can stay healthy and show the raw talent and basketball instincts that KU basketball fan witnessed during his one and only (injury shortened) season in Lawrence. I know Philadelphia fans are hoping for him to help turn their beleaguered franchise around.

Can't help but root for the kid but he should have listened to HCBS..