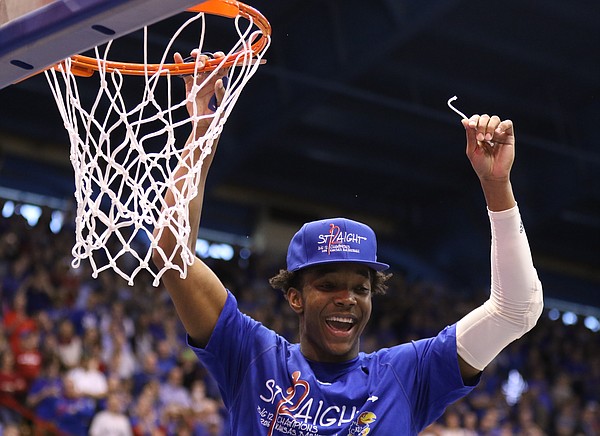 Kansas guard Devonte' Graham (4) holds up his share of the net as Jayhawks celebrate locking up a share of their twelfth-straight Big 12 title following their 67-58 win over the Red Raiders, Saturday, Feb. 27, 2016 at Allen Fieldhouse. by Nick Krug

KANSAS CITY, MO. — After finishing two games behind Kansas in the Big 12 conference standings last year, West Virginia men's basketball coach Bob Huggins said the key to unseating KU at the top of the conference is learning to win at Allen Fieldhouse.

The Jayhawks own a 206-9 record at home under coach Bill Self, including only two league losses since 2007. Obviously, no other team in the Big 12 enjoys the same level of success on its home floor.

"People have to go into Allen Fieldhouse and win once in a while," Huggins said. "Because the rest of us all lose at home, and I think if you look at it, that's without a question, the difference. That has a lot to do with the job that Bill does. Bill does a great job. And they have really good players."

"Kansas' dominance is really -- it comes down to three things," Huggins said, "they've got a great coach, they've got great players, and they never lose at home. Until we start beating them at home -- and we had chances, we had chances. We missed free throws and a lot of crazy things happened at Allen Fieldhouse now. So we end up losing. If we had beaten them, I think somebody else would have had a chance to maybe tie for the league championship or whatever."

Despite KU's long streak at the top of the conference, Huggins disagrees with people that believe it hurts the image of the Big 12 to have one team with a monopoly on conference titles.

"I don't know why that would taint anything, you know what I'm saying?" Huggins said. "Because they've been one of the top three or four teams in the country for how many years, and that's not going to change. They can be in whatever league you want to put them in and they're still going to be. Don't listen to those people."