Wednesday's KU-K-State volleyball showdown to be televised by ESPNU 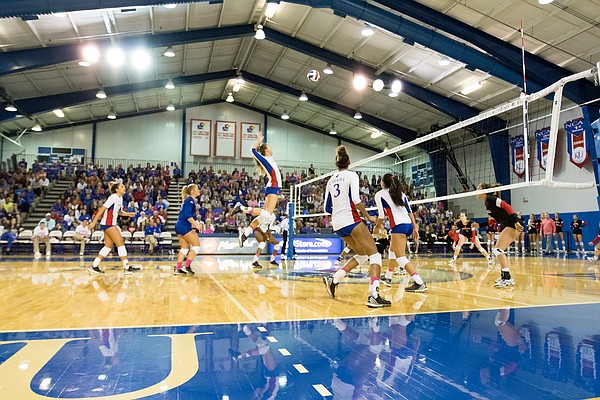 Junior outside hitter Madison Rigdon prepares to spike the ball over the net against Texas Tech. by Kyle Babson/Special to the Journal-World

The Kansas women's volleyball team, ranked No. 6 in the country with a 15-2 record, will play host to Sunflower State rival Kansas State at 6 p.m. tonight at Horejsi Family Athletics Center.

If you're like most Kansas fans in the area, getting a ticket for the Jayhawks' sold-out, always-wild home venue will be next to impossible. But that doesn't mean you can't see the action.

The Jayhawks, whose two losses this season have come to No. 4 Texas, in Austin, and No. 22 Purdue, also on the road, will play this one on national television on ESPNU.

The Jayhawks have been ranked in the Top 25 of the AVCA poll for a program-record 22-consecutive weeks dating back to last season, including 18-consecutive times in the Top 10. KU finished last season ranked No. 4 after advancing to the Final Four.

Kansas State leads the all-time series with Kansas, 61-42, but the Jayhawks have won seven of the last eight meetings with the Wildcats, including a series sweep last season and a pair of wins over ranked K-State teams in 2012.

Tonight's showdown features one of the top defensive teams in the conference — KU leads the Big 12 in four defensive categories — against one of the most potent offenses.

It also features yet another opportunity for the Jayhawks to lay it on the line in honor of academic advisor Scott "Scooter" Ward who remains in the hospital after surgery to repair a tear in his aorta last Friday. Updates from those who have made the trip to visit with Ward have been increasingly encouraging and doctors continue to be pleased and surprised by his progress during the recovery process.

It is seldom in life that you come across someone as inspirational as our academic counselor, Scott "Scooter" Ward.

He has faced so much adversity in his own life, but never do you hear him complain about his own circumstance. Rather than do that, he puts all of his energy into helping others and creating opportunities for the people around him to get better. He has done that for everyone involved in our volleyball program.

As we all became aware of Scooter's (emergency open-heart surgery) situation last Friday and we spent time together processing that, it was clear how every team member felt about him – how important it is to all of us that he gets a full recovery and what a joy it will be when he returns.

Our team realizes how much he cares about them and how badly he wants them to succeed. He is there for them beyond the academic support level. He is willing to listen and impart words of wisdom. He cares about the individual. He has devoted his entire career to preparing young men and women for life.

It is very difficult to come up with a way to thank a person like that, other than be the best we can be in his absence right now. On his return, hopefully we can continue to be that way. We look forward to that day when he is back with us full-time and supporting us at the level he always has.

Our team will continue to move forward and we will honor his absence by being the type of people and team he would be proud of.