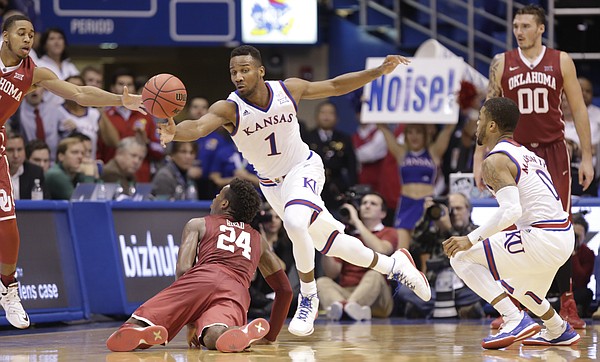 Any time Kansas basketball plays, it’s a big deal in Lawrence. But the Big Monday, triple-overtime instant classic between the No. 1 Jayhawks and No. 2 Oklahoma was something else entirely.

With no Monday Night Football or major college bowl game to distract the nation’s sports fans, anyone in need of some cheap entertainment found it easily on ESPN, as two of the nation’s elite teams traded big-time shot after big-time shot and combined to score 215 points in a marathon of a Big 12 basketball showcase.

The entertaining performance had the Twitterverse buzzing about the Jayhawks and Sooners, during and after KU’s frantic victory.

Some former Jayhawks, of course, showed their love for the program.

None by Kelly Paul Oubre Jr.

Observations from the KU game last night.. 1. @KUHoops looks to be on the way to another Big12 title. Unbelievably good team.

2. I've been a part of some great basketball in Allen Fieldhouse.. Hadn't seen anything like @buddyhield's performance.

But really, anyone who cares about college basketball couldn’t stop themselves from chiming in on this classic.

"A classic that'll live forever." It's how Brent Musberger described what we just saw. Here's how #OUvsKU ended: https://t.co/7juWAbgKPT

"The Big 12 runs through Lawrence:" pic.twitter.com/oTYeASN1DS

None by SI College Hoops

None by Ryan Fagan

Incredible night of college hoops, and impeccably timed for the nation to actually notice.

Standing O to both #Kansas & #Oklahoma. #Big12 is the best conf in the country. Looking forward to watching more.

Best part of Big 12: True round robin. There is another @KUHoops @OU_MBBall game on Feb. 13. Two No. 1 seeds. Two title contenders.

Forget that. Let's do this again in Norman on Wednesday. Seven-game series. Make this happen.

Sometimes overtime games mask what are actually bad games. Not this one. So well played. Such high level. https://t.co/1yos0q1bXR

If you don't have both Hield AND Niang in your Player of the Year discussion, you've been watching too many bowl games. Equally brilliant.

As much as everyone loved watching the Big 12 thriller, the game even had a little controversy — in overtime, no less.

Wild nugget from Game of the Season: KU nearly committed 6-player tech on final play of OT1, but noticed at last sec pic.twitter.com/ERbpUzEiYM

Pretty obvious violation to anyone that has played basketball https://t.co/tuLvd92TA3

VIDEO: You Make The Call: Did Frank Mason commit a violation on game-winning steal? https://t.co/wAHhpKaQ5T

That was a hell of a win by Kansas — regardless of the call whether Frank Mason was too close to Buddy Hield on the inbounds.

Looked at replay. It's not obvious Mason crosses plane before ball is inbounds. Dumb controversy. /turns off twitter

None by Ken Pomeroy

The way this game was played neither team was leaving Allen Fieldhouse feeling bad about itself. And since KU won, maybe (just maybe) Jayhawk fans would be interested in watching Buddy Hield score each of his 46 points all over again.

Buddy Hield knocked down 46 pts, the most vs. a #1 team in 20 seasons. PS: He played all but 1 minute of the game😳 pic.twitter.com/UxumnUkNW9

Before Buddy left the court, @DickieV praised Hield for his giant performance at the Phog. pic.twitter.com/TbbVvBrgLV

No matter who you were rooting for, this one was just a pleasure to watch.

Good stuff. That one from Luke Winn with the 6 men on the court about gave me a heart attack all over again just now... scary!

Doug Gottlieb and Jeff Goodman are two of the biggest tools and KU trolls in sports media. I'll never wish anything bad on them, but I'll never applaud their accomplishments either.

Doug Gottleib or anyone who wants to whine about the Mason steal should stop and realize if Mason's obviously clean strip of Hield's ball during regulation had not been incorrectly called a foul, then there is no made free throw for the foul and no technical resulting in two more made free throws. In other words, if that erroneous call had not been made, Kansas wins by 3 in regulation. No overtime, no steal of the inbounds pass. Think about it and stop the whining.

Not to mention that Mason got hacked on the final drive of regulation with no call. Then the refs practically gift wrapped the game calling over the back on Lucas. Lattin just couldn't finish. I feel no sympathy for anyone complaining about that specific call, other than to say it was one of the worst nights of officiating I've ever witnessed. I haven't rewatched the game, but I suspect if it had been called perfectly, the result would have been the same, just a lot sooner.

I am not sure anyone should listen to basketball commentary from someone who wears his basketball shorts backwards. Rock Chalk.