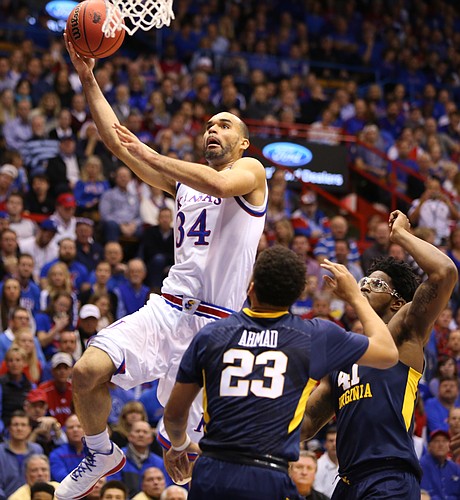 Kansas forward Perry Ellis (34) gets in for a bucket past West Virginia forward Elijah Macon (45) and forward Esa Ahmad (23) during the first half, Tuesday, Jan. 9, 2016 at Allen Fieldhouse. by Nick Krug

Sports fans, myself included, absolutely love lists. They just can’t get enough of them.

From the Top 5 rivalries of all-time to the Top 10 power forwards in NBA history and Top 100 players of the century, the reason lists are so entertaining is because they spark immediate debate and also allow fans — or haters — to judge whether they deem the lists to be accurate or not.

Around here, few lists go over better than ones about Kansas basketball and, earlier today, I scrolled across a list at espn.com that I thought KU fans would love to hear about.

It’s in the Insider package so if you pay for such access, be sure to check it out here. If not, here’s all you need to know.

With March approaching (after today, there are just 12 days remaining in February) ESPN Insider’s John Gasaway put together a list of the 50 college basketball players who he believes could make “the most noise in March.”

Naturally curious, I clicked on it to see how many Jayhawks made the list. Somewhat surprisingly, there was just one, but that one came in at No. 3 on Gasaway’s list.

I’m sure by now you’ve already guessed who the one is, but I’ll go ahead and say I was a little surprised that at least one other Jayhawk did not make the cut, most likely Wayne Selden because of his great start to the season, big game against Kentucky and huge showing in Korea last summer.

After thinking about it, a Top 50 means that 18 teams that will make the field (many of which we don’t actually know yet) will not be represented on this list. And when you look at it that way, it’s hard to justify picking multiple players from too many teams. In fact, Gasaway did not double up on any teams, which may have been a rule he imposed to keep himself from loading up on the high-profile teams. If so, good for him. The list is full of lesser-known names and is definitely worth the read if you’re jonesing for an early start on your bracket.

As for the lone KU rep, here’s what Gasaway had to say about senior forward Perry Ellis:

“Ellis has been on a tear in Big 12 play, and the senior has been drawing more fouls this season than at any time in his career. For the better part of four seasons, Bill Self has been able to play the 6-foot-8 Ellis at power forward and get highly efficient scoring in an exceptionally low-foul, low-turnover and low-drama package.”

He pretty well nailed it about Perry Ellis, especially the "low drama" part that keeps him flying under the radar.

Perry Ellis has been a remarkable ambassador for the University of Kansas. He will certainly go down as one of my favorite Jayhawks. He is the definition of a student-athlete and I don't care how you feel about his game on the court, you have to respect and admire the guy for the way he handles himself. Even as a senior you can tell he continues to craft and develop his game and athletic ability. I think he's dunked more this year that he has the rest of his career and his three ball is fantastic! Very proud Perry Ellis graced a KU jersey for his career. Since Matt mentioned lists, here is my list of favorite Jayhawk players. Based on who I just loved watching play the most.

Thoughts? I loved to see your guy's lists as well. But I thouroughly enjoyed watching these guys throughout their career and the way they represented KU. Rock Chalk!

Danny Manning was the Michael Jordan of Kansas basketball. I hope you got to see him play.

Unfortunately. Danny and the Miracles were before my time. I have seen plenty of footage but obviously it doesn't have the same feel and being able to experience it while he was playing. I just wanna point out, this list isn't based on talent necesarily, more just guys I always got a thrill watching play for various reasons.

The thing I remember about the Manning/Brown title team was when they finally got it together they did not play down to the competition. They wore you out and blew you out. No prisoners.

They suffered a lot of losses during the title season, but they avenged 3 or 4 them in the tournament to win it all. Duke, KState (I think), and OU...

The reason why Selden is not on the list is because he is inconsistent. Perry, on the other hand, is the very model of consistency. Hard to make noise if you have to step out of character to be the man.

Perry is going to be revered at Kansas.

Wayne will be remembered maybe wistfully and if he stays maybe different than that. Did I just define inconsistent? Lol

Why is Selden so inconsistent and why did Self say (after the game) he thought Wayne was ready to step up against OSU?

I don't think Wayne has control over his up and downs in any meaningful way. I know he is aware that he was only averaging 5 points a game during the 4 previous games. He would force it and it would turn out wrong and he would make dippy fouls to take a place on the bench. He hits for 33 against Kentucky and then disappeared for a stretch of games. Just like he has done his whole career to date.

You can tell he is not being Seoul Man when he dribbles down court, stops and then throws it to Landen or Jamari who are 15' from the basket, why would you do that? You can tell when he is on the wing and going to drive it come hell or high water and everyone sees it coming and can stop it. When he is doing his fade away 3's and missing it is almost telegraphed also.

Then it turns. He flashes into the lane and makes a no look pass for a layup. He drives and jams it or does a Tyshawn 8 foot layup off the glass that is pretty as a picture. He stays in front of his guy, denies him the ball and then dives out of bounds to save a turnover.

Someone tell me please? I don't really mind it anymore just wondering what is going on and what makes him tick or tock.

And while you are at it explain Brannen, okay?

I'd say he's been very consistent. He has stepped up when he needed to.

Five is a tough list but here are some others to consider for riveting entertainment and game-altering impact on any given night: Ron Kellogg (imagine if he had a 3-pt rule!), Richard Scott, (automatic 6 points in the post before first 4 minute timeout), Terry Brown(1989 game vs. Kentucky - nuff said), Paul Pierce (the Truth is the best beginning to end career baller since Wilt)