According to multiple recent reports, highly coveted high school senior Josh Jackson, a 6-foot-7, 201-pound McDonald’s All-American wing ranked No. 1 overall in the Class of 2016 by Rivals.com, will announce his college of choice next Monday or Wednesday.

This is in line with Jackson’s original timeline of sometime after the Nike Hoops Summit game, which is scheduled for 2 p.m. Saturday and will be shown on ESPN2.

As for which day is most likely between the two, Eric Bossi, a national recruiting analyst for Rivals.com, recently Tweeted that Jackson told him that Monday would be the day.

No. 1 Josh Jackson tells me that Monday is likely going to be the day for his college decision.

Kansas and head coach Bill Self remain in good position for Jackson’s services and the Jayhawks are competing with Michigan State and Arizona to land the standout perimeter player who has the total package and figures to make an immediate and profound impact wherever he plays his college ball.

Jackson, who earned co-MVP honors at the McDonald's game, has said throughout the process that he's looking for the best fit for him as a person and basketball player and often talked about how important the family feel would be for him in choosing a school. 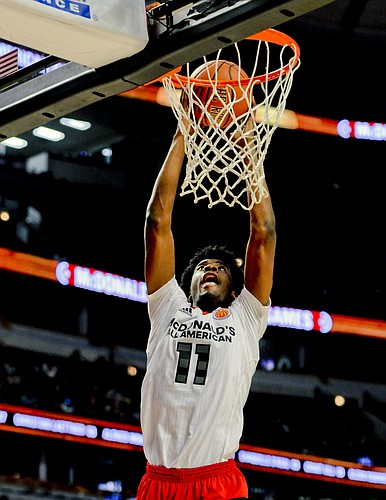 Here are a couple of recent good looks at Jackson from USA Today.

•Josh Jackson is two different people on and off the court

•How often is Josh Jackson asked about recruiting?

File this under: ways to make me want to throw up.

He'll be here what, 7 or 8 months? And he needs to make sure he has a family feel?

I wonder if the mentors, and the family members understand how much added pressure they place on these kids by turning a really straightforward process into a Drama Queen festival?

Come or don't come. If you do, you better friggin' bring it and not spend March worrying about your draft stock.

I've felt myself becoming disenfranchised with college basketball recently. But I try not to blame the kids... it really is the system.

So, here's a possible answer: USA Basketball. Take the top 12 kids coming out of high school. Create a Team USA and play a year of international, collegiate exhibitions, etc. Bring them home a month before the NBA draft, have a month of evaluation/observation, and let them go pro. If they aren't drafted, they can go international or go NCAA, but on a 3-year count against the scholarship limit.

I worry that that solution potentially punishes colleges because of an NBA mandate (which is as Joe points out a "systematic problem"). I think the NBA could make this easier on everyone by raising the age for the mandate to 20. You're happy. I'm happy. College coaches and fans and NBA teams are all happy. Easy fix. There's even been talk of it by both Adam Silver and Emmert. They should do it.

Joe, this is the biggest copout that the NCAA uses and we enable them by repeating it. The NCAA could value the scholarships at 3 years and the situation would be resolved in 24 hours. It's not the NBA's fault. It's the NCAA's fault for not standing up for anything that they say that they stand for.

The fight over the 13th best one will be the same as the current recruiting. Just like it was when kids could go from High School.

Just because this kid wants to make sure an important year (or however many months) in his life is spent in a positive situation, why be critical of him?

Why not just come out and say you're envious?

My response wasn't about recruiting, Dumbo. It's about the OAD issue.

Jackson's decision is so easy, he could throw ten college names in a hat and be fine at anyone.

"My response wasn't about recruiting, Dumbo. It's about the OAD issue."

Do OAD players get assigned by the NCAA politburo or are they.........recruited?

Not sure if that's your idea or you read it, but that's an interesting thought. It is hard to get attached to players who are around for such a short time. On the flip side, however, if we get a kid like Landen Lucas, who does stick around, we hear all kinds of whining about him on this board. So is it really an issue?

Do you spend all the time you have worrying about the institutions your work with at your own personal expense?

I'm sure Jackson, or any other player, never spend one second trying to please you.

They just do their best because it serves both purposes. That's how the free enterprise system works.

Your first sentence is incomprehensible.

I do think that the University of Kansas should be more than an OAD ball factory.

I also think that if we are going to go ahead and whore ourselves out, then we should expect to get paid.

...there is no such thing as free enterprise. It hasn't existed since societies decided to organize.

As a KU graduate, I think that I'm entitled to my opinion. And no, I'm pretty sure no player cares what I think. Do you think that anyone cares what you think? No? But you still come on here and post. Why? Because it's a friggin' D-board moron!

..."we should expect to get paid." Have you check KU hoops revenue? Wow. No wonder you're capable of being bamboozled by the likes of Obama.

"It's our job to serve our best purpose" Who is that referring to? It's sounds like you're agreeing with me...I'm scared....

"There's no such thing as free enterprise" Will you take that position when you want businesses and taxpayers extorted some more?

Really. I wonder how you exist in life. Teacher? Postal worker? You would have to be completely unionized and insulated from having to achieve anything at all to actually think those thoughts.

I'm forwarding your comment on to JJ so he knows how his Kansas "family" really feels about him!

College basketball season is in the books, and yet Big Monday looms large.

Interesting idea, Brett. Sounds workable to me. You are also right, Mr. Joseph. You can't blame the kids for wanting to realize their dreams. The system is indeed cockeyed, and I would like to see more proactive solutions. That's why I am intrigued by Brett's idea.

In the McDonald's game, the announcers listed five of the players who supposedly are NBA-ready now, and Josh was one of them. Given that lesser talents, who aren't even projected to go in the first round, are declaring for the draft, it is obvious that college is not on their minds. Therefore, the current "rent a player" approach isn't working, especially for players like Kelly Oubre, Cliff Alexander, and Cheick Diallo.

Andrew Wiggins is a good example on the other end of the spectrum. I am glad that he played one year at KU, but we knew from Day 1 that this was the scenario. As the season progressed, he had some thrilling games, but as the season got near the end and Joel Embiid was out and Perry Ellis wasn't at full strength, I think he realized that KU's fortunes in the NCAA tournament didn't look very promising, and his energy level seemed to decline. At least, he was basically a "no show" in the Stanford game that sent us packing.

I can fully understand the tendency to think about the future at that stage, and I am sure that I probably would have reacted the same way. Therefore, I am not casting aspersions on Andrew. He comes from a fine family, and he clearly didn't deceive us in any way.

Would be interested in your thoughts on this Mr. Ross.

jay scott, you are an idiot....i hardly say anything on here, but your 'inputs' are getting annoying. all you do is attack other posters. and no need for any political cheapshots. it's a BASKETBALL forum! as for your teacher comment, both of my parent's are teachers and have helped out hundreds of kids achieve their dreams. I used to like coming on here and reading the comments, but it has turned into a pissing contest with a couple of posters simply attacking each other back and forth through the entire threads. I'm officially done reading these comment sections.....no one wants to read your long, repeated tirades.

Feel free to take the position of anyone who's point I choose to counter and help them out. Can't? Then get lost.

There seems to be a hypocrisy when it comes to kids that basketball and their dreams to go pro and make possible millions .......Kids that play baseball get drafted right out of high school as well as hockey players . Golfers can go pro and tennis phenoms play on the circuit sometimes while in high school. Only the NFL restricts younger players or underclassmen from entering the draft as it should be.True not all kids are not college material they just bide their time because their goal is the next level. A kid should not feel guilty because he was offered millions and took it just because he was a OAD. As fans we tend to be selfish because we want them to stay for our entertainment ,but the NBA becomes a job if they are fortunate enough to make it .To say the players only are looking out for themselves ,don't we all look out for ourselves . I don't like the grandstanding that the new recruits use but they want to stay relavent in conversations as long as possible e.g. Josh Jackson .Once they make their choice they are off the national stage until the season begins . But like most jayhawks lets get over with so we can move on.