And they're off! KU volleyball heads to San Diego for Sweet 16

The Kansas University volleyball team, ranked ninth in the country and seeded as the No. 9 overall team in this year's NCAA Tournament, left Lawrence a little after noon today for the airport and a flight to San Diego, where the Jayhawks will play in the Sweet 16 for the second time in three seasons.

KU, which advanced to the San Diego regional site with home wins over Furman and Missouri, will play Loyola-Marymount at 7:30 p.m. Friday with a berth in the Elite Eight on the line.

LMU enters the match having won 5 straight matches while the Jayhawks enter at 28-2. 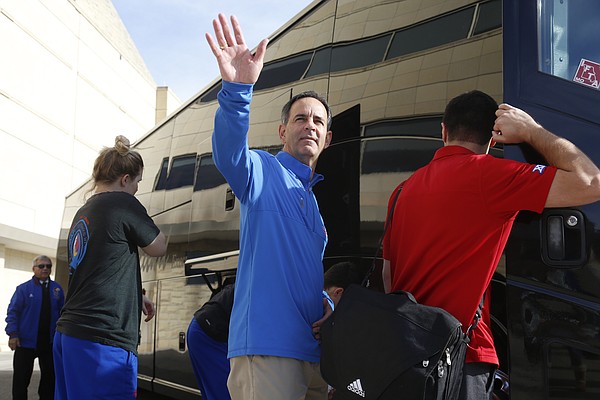 KU volleyball coach Ray Bechard waves to the crowd on Wednesday Dec. 9, 2015, as the team left form Horejsi Family Athletics center, and boarded a bus to the airport, as the Jayhawks head to San Diego for the Sweet 16, against Loyola Marymount on Friday. by Richard Gwin

In case you missed it, here's a look at some of what we've written so far this week about the volleyball team's run in this year's tournament. Be sure to stay logged on to KUsports.com throughout the week for much more from San Diego, as Journal-World sports editor Tom Keegan will be on the ground in southern California.

Memories from 2003
From Matt Tait: Former KU libero Jill Dorsey looks back at KU's first ever trip to the NCAA Tournament and discusses why this team is ready to go farther.

Ready for more
From Matt Tait: Kansas learned a little something during its last trip to the Sweet 16 and the Jayhawks are ready to take the next step this weekend.

Horejsi kind to Kansas
From Matt Tait: The Jayhawks may have hosted NCAA Tournament matches for the fourth year in a row but playing in their home gym made it a different experience.

On to the Next Round
From Gary Bedore: The Jayhawks made quick work of Furman in Round 1 to advance to the NCAA Tournament's second round.

What's Up, Dock?
From Tom Keegan: Senior Tiana Dockery, the first KU player to appear in four consecutive NCAA Tournaments is living proof that Kansas volleyball is for real.

Kansas University fans waved to the KU volleyball team on Wednesday Dec. 9, 2015, as the Jayhawks left form Horejsi Family Athletics center, and boarded a bus to the airport on their way to San Diego for the Sweet 16, against Loyola Marymount on Friday. by Richard Gwin

It's really great to see all of this excellent coverage. The team has earned it. They're making us proud.

By the way, FWIW, a minor correction is in order: "LMU enters the match having won 25 straight matches while the Jayhawks enter at 28-2." Since LMU's overall record is 24-8, I believe that should be "having won 5 straight matches" for LMU.

Oops. Good catch. Not sure where I got that but I'll fix it immediately. Glad you're enjoying the coverage.