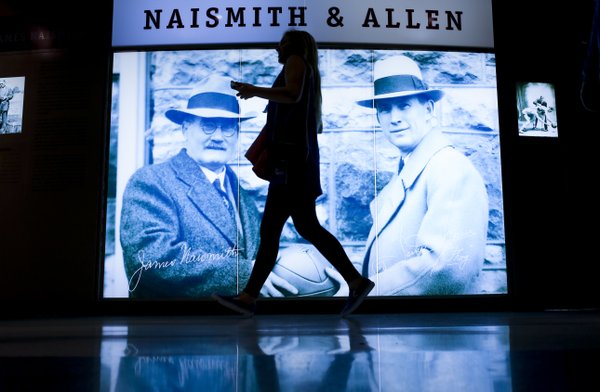 A basketball fan hurries past an image of James Naismith and "Phog" Allen as the Fieldhouse begins to fill for Late Night in the Phog on Friday, Oct. 10, 2014 at Allen Fieldhouse. by Nick Krug

On Monday, the discovery of an old recording from a radio program broadcast in 1939 was released and the recording featured something that might be near and dear to the hearts of KU basketball fans and fans of the game everywhere.

It's an interview with James Naismith, the inventor of the game and first coach in the history of Kansas basketball and it is believed to be the only known audio recording of Naismith.

In it, Naismith, who had traveled to New York for a basketball doubleheader at Madison Square Garden, discusses setting up the first basketball game with two peach baskets in a gymnasium at the International YMCA Training School (now Springfield College) in Springfield, Massachusetts in December 1891.

This recording was discovered by Dr. Michael J. Zogry, Associate Professor, Religious Studies, and Director, Indigenous Studies, University of Kansas, in the audio and manuscript archives of radio station WOR-AM that were donated to the Library of Congress by RKO General, Inc. Dr. Zogry obtained permission for the University to include the recording in its archives and to use it for educational purposes.

In addition to the historical relevance of such audio, it's a wonderful listen because it gives you a little more of a sense of the man for whom the court at Allen Fieldhouse is named and who you have seen in so many pictures throughout the years.

As Zogry himself said at news.ku.edu: "The recording suggests the gym was a laboratory for developing the game and establishing the rules. There's also value in just hearing his voice. In this day and age of media saturation, to find something like this is surprising. No one's heard his voice in over 75 years. When we hear him talking, we get a sense of his demeanor and his self-effacing attitude."

Hat's off to Dr. Zogry for finding such an incredible interview and for sharing it with the world.

Here's more about the process of Zogry's incredible discovery. 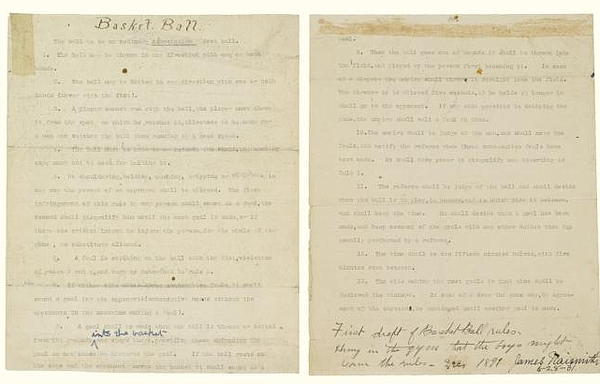 Can't wait for the DeBruce Center to be finished.

Is the link to the audio giving anyone else trouble? It's not loading for me.

Look on the DeBruce Center Facebook page. That one works.