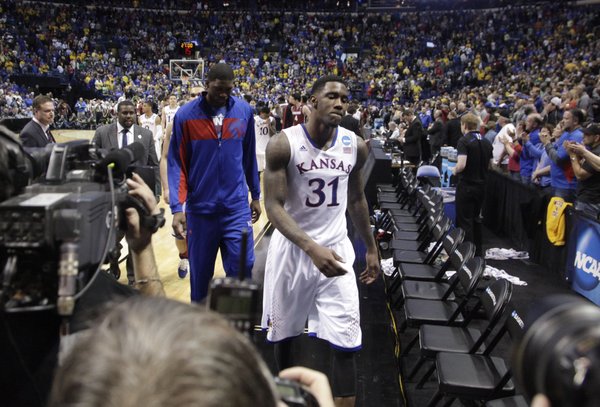 Kansas forward Jamari Traylor and center Joel Embiid walk off the court following the Jayhawks 60-57 loss to Stanford, Sunday March 23, 2014, at the Scottrade Center in St. Louis. by Mike Yoder

So, about that Kansas University basketball run trip-up in the NCAA Tournament…

Once the Jayhawks disposed of would-be Cinderella Eastern Kentucky, and New Mexico faltered against Stanford in St. Louis, most people who keep up with KU hoops figured: Next stop, Memphis.

Instead of forging on to the Sweet 16, though, the Jayhawks couldn't cut through the trees on Stanford's front line in a 60-57, season-ending loss in the round of 32.

Kansas, the No. 2 seed, seemed like the obvious choice to advance against this No. 10 seed. So one would assume the national college hoops pundits would bash KU for not taking care of business. That didn't happen on a large scale, though.

It must be because Kansas didn't lose to a VCU, Northern Iowa, Bradley or Bucknell that no one freaked out about the loss on a national level. One power conference team knocking off another doesn't draw the attention of a Southwest Who University beating a blue blood.

With that in mind, here are some of the national observations on what proved to be the final game of the 2013-14 KU basketball season. 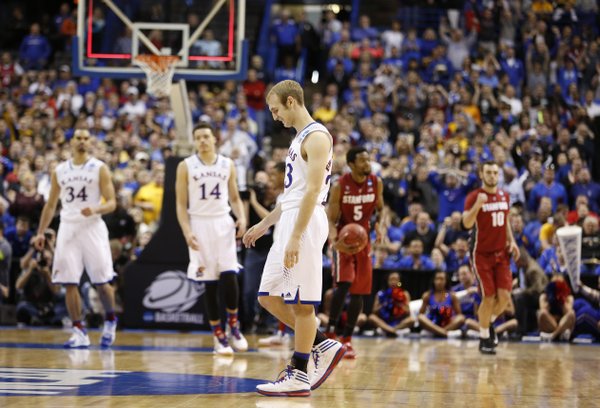 Kansas guard Conner Frankamp walks off the court after missing a three with seconds remaining against Stanford on Sunday, March 23, 2014 at Scottrade Center in St. Louis. by Nick Krug

• Seth Davis, of CBS and Sports Illustrated fame, had to include KU's performance against Stanford in his piece on the NCAA Tournament defying convention.

Davis included a couple of thoughts on Kansas:

"Kansas doesn't need me to make excuses for them, but without Joel Embiid, the Jayhawks are just another good team."

"That game against Stanford was a great example of why we use the word "matchups" so much when analyzing the NCAA tournament. There are many teams that are as good if not better than Stanford that would have provided a more comfortable matchup for Kansas."

• SI.com had at least one reporter from every tournament site this past weekend write about what he or she learned in the round of 32.

Like many who watched Kansas vs. Stanford, Niesen remarked on the unspectacular fashion with which the Cardinal eliminated one of the tournament's perceived favorites:

"In fact, not much that Stanford did was anything approaching pretty, but it was methodical in its approach, exploiting Kansas’ weaknesses and shutting down Andrew Wiggins (four points on 1-of-6 shooting), which proved to be just enough." 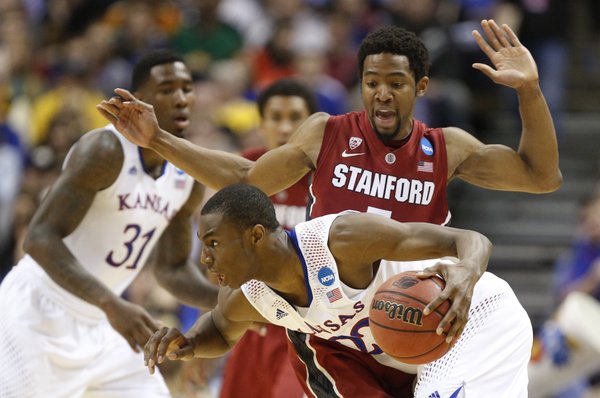 Kansas guard Andrew Wiggins tries to drive around Stanford guard Chasson Randle during the second half on Sunday, March 23, 2014 at Scottrade Center in St. Louis. by Nick Krug

• Yahoo's Jeff Eisenberg offered his best and worst of the opening weekend. Guess which category KU landed in.

Eisenberg picked Wiggins as his "player who shrank in the spotlight."

"Stanford's array of zone defenses turned Andrew Wiggins into the world's most athletic spot-up shooter. The freshman phenom and potential No. 1 pick in this June's NBA draft attempted only six shots and sank only one of them in Kansas' stunning 60-57 loss to the 10th-seeded Cardinal in the round of 32."

• Over at NBCsports.com, a few writers listed the NCAA Tournament's biggest surprises heading into the Sweet 16.

Terrence Payne said the bottom half of the South Region — Stanford vs. Dayton in the Sweet 16 — is the biggest surprise of the NCAA tournament so far.

"I fully believed that Kansas was susceptible to a Round of 32 loss without Joel Embiid — why can’t I quit you, New Mexico? — but I never expected Stanford to be the team to do it."

• BleacherReport.com college basketball writer Jason King appeared on ESPN's Olbermann to discuss KU freshman center Joel Embiid, and whether he will play another game in a Kansas uniform.

In King's opinion, Embiid probably needs to go ahead and enter the NBA draft, because he will likely be a top-three pick.

King also weighed in on Wiggins' difficult ending to his one-and-done KU career, saying the freshman's off afternoon against Stanford won't hurt his draft status.

Don't know if anyone spotted this in the moments that followed KU's loss to Stanford, but one Cardinal fan apparently tried to storm the court.

(Disclaimer: Not sure one person qualifies as a storm.)

Stanford just had a lone-man court storm for maybe 10 seconds.

the lone stormer RT @KyleTucker_CJ: This dude jumped over press row, hugged some players before he was dragged off pic.twitter.com/OBTPvrOmAC

That doesn't really fly in the NCAA Tournament, FYI.

Also, Davis fielded some KU-related questions on Twitter after the Jayhawks' season ended.

they're losing a lot but Sweet 16 wld be improvement RT @Jayhawk432: Will Kansas be better next year w/o Wiggins, Black and Embiid?

Cuse cause they were at full strength RT @uconncrazy: bigger surprise - Kansas or Cuse?

I personally don't think having Embiid would have helped much. Our guard play (especially offensively) was just too weak. Ellis struggles against the big boys as well.

I'd like to see more attention of the media on how Wiggins game is no where near ready to make much an impact in the NBA. I personally think BMac is ahead of him (especially shooting), and he is struggling for minutes only getting 7.9 points/game.

I'm really hoping this year is the end of the OAD rule. I love seeing players develop as people and players in the NCAA (Withey, Twins, Releford, etc.) The NBA OAD rule is ruining it!

I think the next time NBA players/owners can rework the collective bargaining agreement is in 2017 so any changes aren't really possible until then.

Edit: The NBA rule is the one that drives the entire process. Luckily the new NBA commish seems displeased with the current rules so I think its likely it'll get changed in 2017, unfortunately we still have 3 more years (at least) of OAD's to deal with.

I believe the NBA comish went on record saying they are waiting for the NBA players union to appoint new leadership to discuss the issue. I could be wrong though.

Correct. It'll be 2017 before the new 20 year age limit would go into effect.

I disagree wrt the Stanford game. His inside presence converts a lot of the shots we missed under the basket, and especially after Black fouled out was when we really needed him Our defense was actually pretty good, we just didn't convert on the offensive end. Against EK, JoJo would not have made any difference because we owned the paint all day long w/o him.

Embiid is not the reason we lost that game. He is not the reason we shot 32.8% from the field. We held Stanford 13.5 points below their season average and we were 22.6 points under ours. Sure, having him inside would have helped us run our offense, but if we shoot 36.2% (still crappy), we win the game. All other stats were more or less even. We lost the game because nobody on the team could make a freakin' shot except Conner and Tarik.

Is anyone curious as to why Self doesn't play Ellis more as a stretch-4?

No one was in an uproar because they watched the games in Stillwater and Morgantown... and the Embiid injury offered up an easy rationalization.