The all eyes on Joel Embiid's back edition 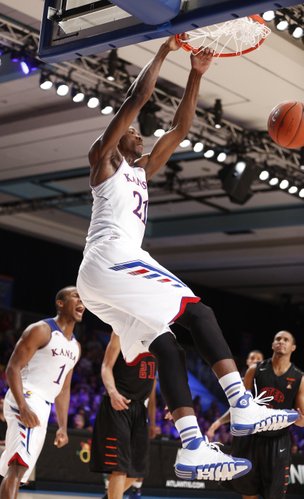 Kansas center Joel Embiid delivers a jam from a lob pass over the UTEP defense during the second half on Saturday, Nov. 30, 2013 in Paradise Island, Bahamas. by Nick Krug

It might be Championship Week, with NCAA Tournament berths getting handed out on a daily basis, but the eyes of the college basketball world turned toward Lawrence, Kansas, Monday night with Bill Self's announcement that Kansas University freshman center Joel Embiid will not only miss the Big 12 Tournament due to a stress fracture in his back, but also will likely miss the first weekend of the Big Dance.

How soon will Embiid be able to return? How does his absence impact KU's seeding? Should the center return at all this season? That and more were discussed in the minutes and hours that followed the news.

• In Andy Katz's 3-point shot video Tuesday for ESPN.com, the national writer said Kansas will be discussed intently by the NCAA Tournament selection committee, due to the mystery surrounding Embiid's availability for the championship event.

• ESPN.com's Myron Medcalf wrote Embiid shouldn't worry about returning to the floor to finish his freshman season at Kansas.

Rest and rehab, prior to this year's NBA draft, was the route Medcalf suggested.

Embiid’s return would certainly help one entity: Kansas. But it could do more harm to the fragile back of a young man who won’t last long in next summer’s NBA draft if he enters it.

• Kansas isn't the only team that had serious March Madness aspirations altered in one way or another due to the loss of a key member of its lineup this season.

Mike DeCourcy of The Sporting News offers a look at some other prominent long-term injuries and how each program has adjusted.

Obviously, the college hoops social media scene buzzed Monday night with the news of Embiid's stress fracture. Below are some of the highlights.

So now depending on how Kansas does in Big 12, selection committee will have an interesting decision on seeding for Jayhawks.

Kansas isn't Final Four team without Embiid. Jayhawks in trouble without him. Need him to return but why would a likely top-3 pick risk it?

Joel Embiid has stress fracture in back. Out Big 12 & first weekend of NCAA. Interesting conundrum for committee but more, wish Embiid well

Question now becomes whether the Jayhawks can hang onto a No. 2 seed -- or fall to a 3 seed if they lose first game of Big 12 tourney.

Some college coaches would get criticized for even allowing a potential No. 1 pick to come back and play under these circumstances.

None by Dan Wolken

Self is one of the chosen ones. Nobody will go after him. RT @ColTroutman: @DanWolken What? Explain yourself

None by Dan Wolken

Could. Have to see how the big 12 tournament goes RT @Woodrow913: how will the Embidd injury affect #kubball seed if at all??

None by Jerry Palm

In last game the selection committee saw Kansas play without Embiid, the Jayhawks lost at West Virginia. KU 2-1 w/o Embiid Ws over TCU/Tech.

Andrew Wiggins needs to look more like he did against West Virginia over next couple weeks w/o Embiid, but key for KU is also Naadir Tharpe.

Just talked to one NBA GM: "Now it's a three-man race again -- and Embiid might be No. 3 depending on how his back checks out by doctors."

Think he'll strike while iron hot. RT @Rufio8675309: @TimBrando @franfraschilla Does the back keep him at KU one more year? He's just so raw

No Embiid? @Big12Conference Tournament just got crazier! Almost anything is possible. 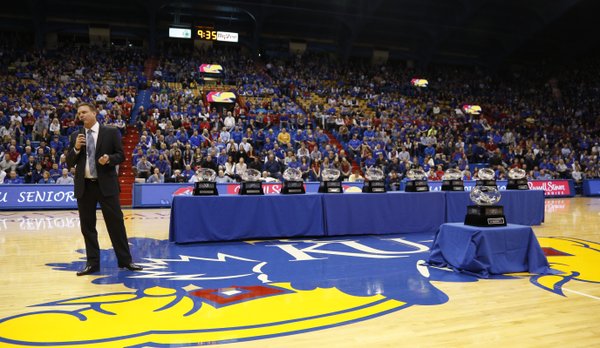 Kansas head coach Bill Self addresses the fieldhouse next to the program's ten consecutive conference titles following the Jayhawks' 82-57 win over Texas Tech. by Nick Krug

• CBSsports.com's Gary Parrish wrote Self deserved to be the Big 12 Coach of the Year.

Parrish thought Rick Barnes of Texas and Lon Kruger of Oklahoma both were strong choices, but he claimed Self shouldn't be discredited just because his team wins the league every season — at least for the past decade.

But the fact that Self makes it look easy doesn't mean that it is, you know, easy, and I'll stand by that statement forever unless you can hit me with a long list of coaches who have A) won 10 consecutive league titles, or B) done it three times without a single returning starter.

The projections, Pomeroy admits, come with a disclaimer: the numbers don't take into account the absence of Embiid.

Still, Pomeroy thinks KU is the most likely tournament champion, and he provides the chances each Big 12 program has to each each round of the tournament. Here are the percentages he gives each team to win the championship:

Check out Pomeroy's explanation of each team's chances to win at kenpom.com.

I remember the WVU game in AFH as being one Black stepped up in. Embiid played around 17 minutes and had good production in those minutes ( 11pts 12reb 2to 3blks I think?), but he played more in the second half and was in at the very end of the game (when he tweaked his back).

My point is - we can play pretty good basketball without Embiid if at least one of our other bigs can be a factor on a given night. Black is a presence inside from a physical standpoint, but he got called for a lot of road fouls for that exact same reason. Not having a completely gaping hole in our interior defense takes a lot of pressure off of the defense simply by not being that specific "thing to watch out for". A weak point is treated tenderly and shielded. Just like playing with a weak knee or a bruised rib, it lingers and affects the rest of your game. We don't need the bionic knee that is Embiid to win, but we need a sturdy knee of some sort.

As Self said, there are 3 seasons. Well now it is the 3rd season, and already people have forgotten everything this team has done previously because they don't consider it the same team without Embiid. THIS team is starting the new season 0-0 and didn't win the Big 12 conference. People don't think THIS team is capable of getting very far in either tournament, and THIS team hasn't done anything to prove them wrong. Now it is time to prove them wrong. We are an underdog with something to prove.

As much as I would like to see KU win the Big XII tournament, it doesn't really matter. The real third season starts with Selection Sunday.

I agree with you, and in my post above I was in the mindset that the Big 12 tourney didn't matter. Maybe it helps/hurts our seeding. Maybe it is a chance to kill some of the buzz that we are incapable of winning games without Embiid. Regardless of all that, they still have to win games to advance in the tournament that matters.

The point I had in my mind to make is maybe (hopefully) this is an opportunity to motivate this team in a way that we haven't seen since a grass-green squad took the court against Duke earlier this season.