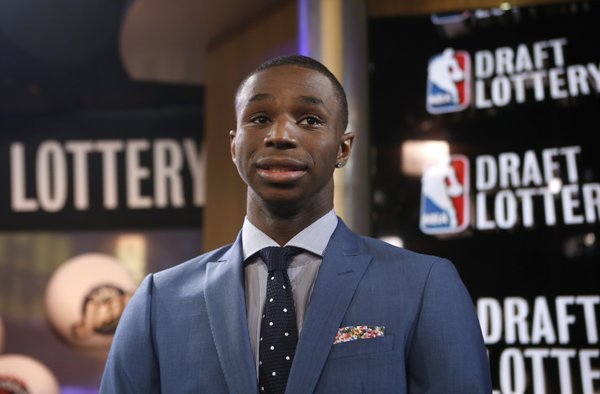 Top NBA draft prospect Andrew Wiggins of Kansas prepares for an interview during the NBA draft lottery in New York, Tuesday, May 20, 2014.

As we get closer to the NBA Draft, Bill Self's Kansas University basketball program continues to get free pub from its one-and-done stars.

The latest endorsement came via an NBA.com interview, in which retired shooting guard Steve Smith went one-on-one with the Jayhawks' Andrew Wiggins.

The former Michigan State star, who spent 14 seasons in the league, asked the Vaughan, Ontario, Canada native why he decided to play at Kansas, and how Self's program prepared him to make the jump to the highest level of hoops.

"I picked Kansas, just because when I went on my visit I felt like I connected more with the coaches and the team, and I just felt like I clicked with their fans. Just walking in the fieldhouse, it's hard to say no."

"And they prepared me for so much. Bill Self is a legendary coach, a great coach, taught me so much this year. And just being in a group with all the team, it's like a brotherhood, you know. I think I'll be able to surround myself with those guys for the rest of my life."

Wisely, son didn't want to leave mom or dad out of the equation.

"I think it's from both, a little bit of both, you know. I've been blessed with some good genes."

Wiggins, who grew up in Toronto, mentioned as he has before about idolizing former Raptors star Vince Carter when he was a youngster. When Smith asked the soon-to-be lottery pick about whether his fascination with Carter would inspire him to enter the dunk contest, Wiggins talked about Carter being one of the best "in-game dunkers of all time," possibly indicating he'd rather try to replicate his boyhood hero that way than compete at the All-Star Weekend event. But considering all-time greats such as Julius Erving, Michael Jordan and Kobe Bryant participated in the dunk contest when they were young players, it might be difficult for Wiggins to turn down such an opportunity.

His NBA journey begins in just three weeks, at the June 26 draft in Brooklyn. Smith asked Wiggins why it was important to him to be selected first overall.

"I want to have that label. I want people to see me as the number one basketball player."

In closing, Smith had Wiggins complete a sentence.

Smith: "When it's all said and done, Andrew Wiggins will be…"

— Click here to watch the full video at NBA.com.

He's letting his actions on the court do the talking. Stay true to yourself, work hard and enjoy the moment.