Cavs torn between Wiggins and Parker; more coming out on Embiid's health

The Cleveland Cavaliers have 48 hours to figure out what, exactly, they want to do with their No. 1 pick in the 2014 NBA Draft.

As of Tuesday, ESPN.com's Chad Ford and Jeff Goodman are reporting the organization is torn. 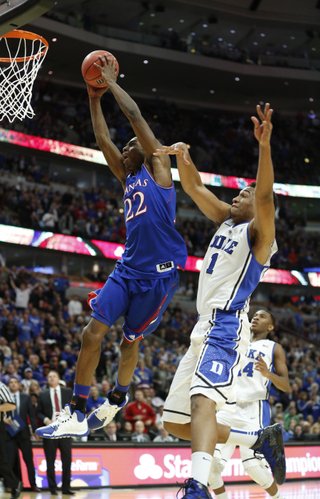 Kansas forward Andrew Wiggins soars in for a dunk past Duke forward Jabari Parker for a dunk late in the second half of the Champions Classic matchup on Tuesday, Nov. 12, 2013 at the United Center in Chicago. by Nick Krug

In Ford's most recent mock draft, released Monday, he had Cleveland going with Parker, a 6-foot-8 forward, despite the fact Wiggins had a far more successful workout with the team.

Ford had some insight on the Parker-Wiggins debate, as well as what else might be scaring some teams away from Embiid, on The BS Report with Bill Simmons.

Ford revealed that more than one source of his indicated Parker prefers Milwaukee over Cleveland, and he either tanked or wasn't worried about his workout with the Cavs.

Between that and the fact Wiggins seems a logical better fit for the makeup of the Cavs roster, and it seems the debate could end up going in the KU swingman's favor.

Here is Simmons' case for Wiggins going No. 1:

"… He's an excellent defender already. He's gonna kind of pick and choose his spots. He drifts out of games — he doesn't need the ball. He has a higher upside, I think we'd all agree, than Jabari. It just makes more sense to take him."

Ford agreed, saying he was confused with Cleveland's infatuation with Parker as a No. 1 pick.

"All I know is the Cavs have been a very screwy organization for awhile, and nobody's gonna be able to criticize them if they get Jabari, because Jabari's gonna be good. He's gonna have a really good NBA career, and he's gonna be good." 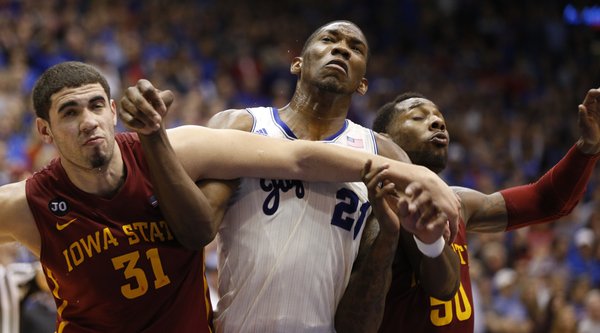 As for Embiid, apparently medical examinations revealed some things about the 7-footer's bone density that could leave some decision-makers skeptical, as did his blood work.

Here's what Ford, ESPN's draft insider, had to say:

"It's not uncommon for athletes who grew up in Africa to test positive for hepatitis, you know, for example. Something that has to do with diet. It's not uncommon for there to be anemic issues and things like that. There's enough stuff there that scares you a bit, but there's also hope that now that he's over here, starts eating right, gets in the right training regimen, lets his body, frame grow into… you know, he was growing so much at the time, that maybe these will be temporary growing pains and Embiid will be fine in a few years. I know a number of general managers who think that way, because I think he goes top 10."

Ford said a number of teams still haven't seen Embiid's medical information and his agent, Arn Tellem, could choose to be selective in its availability.

The ESPN reporter thought Philadelphia at No. 3, Orlando at No. 4, Boston at No. 6 and Philly at No. 10 seemed like possible destinations for the currently injured big man from Cameroon.

One team's doctor theorized, Ford shared, Embiid's body grew rapidly and the athletic center put enough torque on it in that span that it became detrimental to him, and caused the fractures in his back and foot.

"He's gaining weight, and he's getting heavier and his frame's growing, what have you, and this was causing the fractures. But you strengthen his core… and he quits growing and you get him on a right nutritional plan, and all of this stuff goes away."

Listen to the podcast at ESPN.com or on the YouTube player below.

"But you strengthen his core… and he quits growing and you get him on a right nutritional plan, and all of this stuff goes away."

That's pretty insulting to Andrea Hudy, the best strength coach in America. Like he wasn't working on all of that at KU? Other than the "quits growing" part, I would guess nothing else would change that much.

I wouldn't call it an insult to Hudy, but she could only do so much in less than a year for someone still growing into his body. You have the strength of conditioning his body is not used to being provided after 18 years of a different diet and little to no exposure to the gym. His body, unlike American athletes, needs to adapt much differently. The best thing an NBA team can do this year is redshirt him and sit him down this year while he trains and gets even stronger.

In the Doc's defense the Hudyization process really doesn't kick in until after the first season. It does take time to build someone up and even Andrea can't create results over night. I do not think they have the time to properly build up incoming freshmen without taking a chance of screwing up their body mechanics with no time for the player to get used to, and adapt to, the changes.

I don't even know that they're that concerned about the body mechanics with a freshman. They work these kids out as hard as these kids will go, and attempt to build them as much as possible. But the 18 year old body, especially of a lean 7 footer is likely no where near physical maturity.

He may be through getting taller, but the way that the body develops muscle takes time and age. Strengthening the core is usually a key for young athletes, as well as the quads, hamstrings, hip flexors, upper and lower back, and neck muscles. Strengthening of these muscle groups can take a long time and shows little progress along the way, so average joe's like me tend to bypass that and focus on the showy muscles.

I competed in sports almost year round in HS, but never really worked out until after college. And I showed almost no progress in my first year of lifting, because my body had to develop the infrastructure muscles first.

Even with a trainer or a Hudy, it still takes time to develop the infrastructure before you can even really set yourself a baseline for strength and power, and a freshman can only get so far before games start in November. I think that that is why we tend to see such big gains in our sophomores. As incoming freshman they do their best to set a baseline before games start, and then after the season ends, they are able to really start taking the next steps before the coming November.

I've been thinking about the article yesterday that talked about JoJo's affinity to pink lemonade (IIRC). Not sure about what he was drinking in particular, but one thing I know is that the makeup of some soft drinks leach calcium out of the body. Obviously, not everyone that drinks soft drinks is going to develop stress fractures/broken bones, but if JoJo doesn't have good reserves in his body, is physically stressed from the growth, maybe doesn't make all the best choices nutritionally (despite staff exhortations), ...