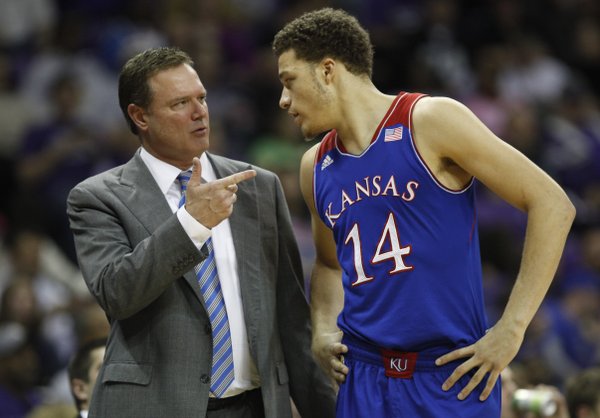 Kansas head coach Bill Self talks with guard Brannen Greene during a break in action against TCU on Saturday, Jan. 25, 2014 at Daniel-Meyer Coliseum in Fort Worth, Texas. by Nick Krug

Very few college basketball coaches own a résumé as impressive as Bill Self's.

Now in his 11th season of leading Kansas University's men's basketball program, Self has a 316-64 record at KU, his teams have won nine-straight Big 12 regular-season championships and six Big 12 tournaments and, of course, he steered the Jayhawks to the 2008 national championship, as well as the 2012 Final Four and three other trips to the Elite Eight (his KU teams are 25-9 in the NCAA tournament).

Difficult as it might be to envision Self coaching any other team, between his consistent success at the college level and the respect his players have for him, it's easy to presume he would make a nice fit as an NBA coach, too, if a professional organization ever came knocking on his door.

Self talked about that very subject on The Seth Davis Show, on CampusInsiders.com.

Davis, a college basketball reporter for Sports Illustrated and CBS Sports, brought up the NBA to Self during a 30-minute interview with the KU coach, and began the discussion by mentioning how the Boston Celtics lured Brad Stevens away from Butler, even though few college coaches are sought after by NBA front offices these days.

Self told Davis he has never received an NBA job offer, and has only had a few people talk to him "generically" about such a scenario. Self added he was happy for Stevens, and he expects Boston's first-year coach to eventually experience success with the Celtics, which should help other college coaches land NBA jobs in the future.

But Self said the NBA isn't something that interests him right now:

"I'm not looking at all. I really believe I've got one of the better coaching jobs in America — pro or college — right here in Lawrence, Kansas. So it would take something really special, and my mindset would have to change, but right now, I'm really enjoying trying to get college kids better. That to me is somethings we take great pride in and something that we all enjoy doing."


The NBA back-and-forth begins around the 23:45 mark of the video, but it's definitely worth checking out in its entirety. Davis also asks Self about the play of Andrew Wiggins, chasing a second national championship and the coach's days as a student at Oklahoma State, when he used to hang out with country music star Garth Brooks.

— Just FYI, the interview took place before KU's loss at Texas, so the topics are more broad than what is going on at this exact moment with the program. 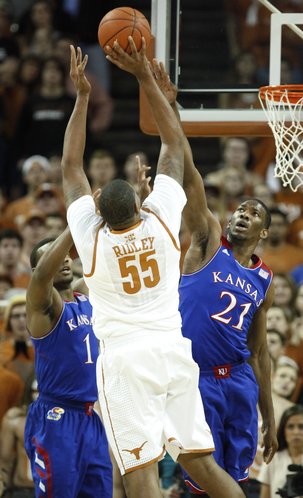 Texas center Cameron Ridley turns for a shot over Kansas center Joel Embiid (21) and guard Wayne Selden during the first half on Saturday, Feb. 1, 2014 at Erwin Center in Austin, Texas. by Nick Krug

Campus Insiders also had a segment on Jayhawks freshman center Joel Embiid a few days ago.

The discourse, which includes a Q & A with the seven-footer's Rock High School head coach, Justin Harden, provides some insight on Embiid's game and how it began to evolve before he graduated and moved on to Kansas.

Harden describes Embiid as an introvert whose personality changes when he is on the court.

As you'd expect, the conversation inevitably veers toward the subject of the NBA Draft. Harden is asked about the likelihood of Embiid going pro upon the completion of his freshman season. Here is the high school coach's response:

"I don't have any insider information, to be honest, but it's hard for me to believe a kid who comes from an African nation, regardless of their background, to pass up that kind of opportunity. Especially if you're the No. 1 overall pick. We've seen people in football or basketball get hurt, and then kind of lose that status, so I would suggest that he go, because in the NBA, he's only gonna get better."


DraftExpress.com's latest mock draft has Embiid as the top pick in 2014, followed by his KU teammate, Wiggins.

For the time being at least, the loss also seems to have slightly damaged KU's potential claim for a No. 1 seed in the NCAA Tournament.

In Michael Beller's Bracket Watch, at SI.com, The Jayhawks currently project as a No. 2 seed.

Hard to argue with those choices.

CBSsports.com has Kansas as a No. 2 seed, as well.

The CBS website's No. 1 seeds as of Monday morning are Syracuse, Arizona, Wichita State and San Diego State (19-1).

This time, it's the Aztecs (like the Gators, a team that beat KU in the non-conference) occupying that fourth spot, which seems more open to debate than the other three.