All-star basketball games have the reputation of turning into open-court affairs in which defense is an afterthought and nonchalantness rules the day.

So the best you can hope for is a tight game in the final minutes. That assures some true competitiveness will be on display.

As it turned out, that's exactly what the 2014 McDonald's All American Game provided Wednesday night at Chicago's United Center.

And two future Kansas University basketball players, signees Kelly Oubre Jr. of the West, and the East's Cliff Alexander, went right at each other — in mid-air — on the play that would help decide the game. 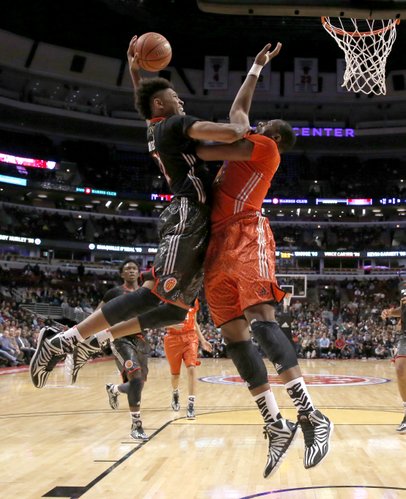 The West prevailed, 105-102, after Oubre attacked the rim and drew a foul on Alexander in the final minute.

Alexander, who played with his right wrist taped, scored nine points off 4-of-11 shooting and grabbed 11 rebounds. He also had an assist and a block in 25 minutes.

Below are some of the game's highlights from MaxPreps High School Sports. Alexander wore No. 11 in red for the East, Oubre was No. 12 in black for the West and KU recruiting target Myles Turner wore No. 35 on the East squad.

You can watch Alexander attack the offensive glass at the 2:10 mark.

We learned a lot about Alexander, Oubre and Turner in the past few days. In case you missed the stories on the two future Jayhawks and their potential future teammate, we've bundled them all together here for you, along with some high school highlights of the McDonald's All Americans. 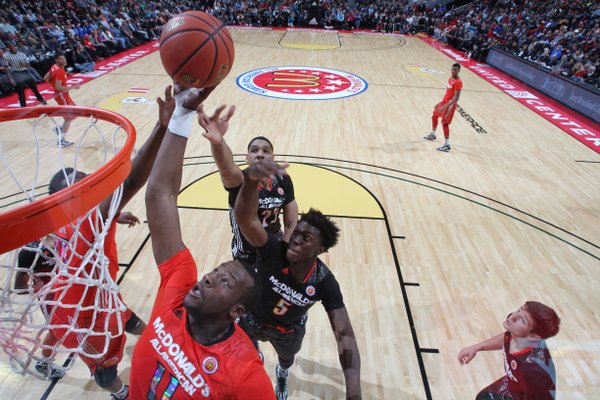 Cliff Alexander, a 6-foot-9 post player out of Curie Metro High, in Chicago, gets his hand on a rebound at the McDonald's All American Game Wednesday at Chicago's United Center. Alexander finished with nine points and 11 rebounds in his East team's 105-102 loss.

Even before he ceremoniously grabbed an Illinois hat off a table, then dropped it and declared himself a Jayhawk, Cliff Alexander spoke openly about his one-and-done intention to help his family financially. 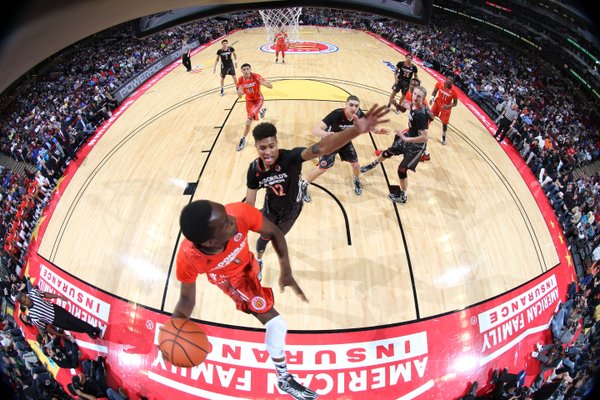 Kelly Oubre Jr., the kid Kansas University is counting on to replace Andrew Wiggins on the wing next season, said the move from Texas to Vegas benefitted him as a player and a person.

“I don’t want to limit myself,” Oubre said. “I want to further my game and challenge myself from a competitive standpoint. We played the best competition every night and did a lot of traveling, got to see the world. More experiences, more maturity and being on my own away from my family is going to help me get ready for college.”

Waiting in the wings: Kansas signee Kelly Oubre says move to Vegas beneficial by By Miek Helfgot/Special to the Journal-World KUsports.com 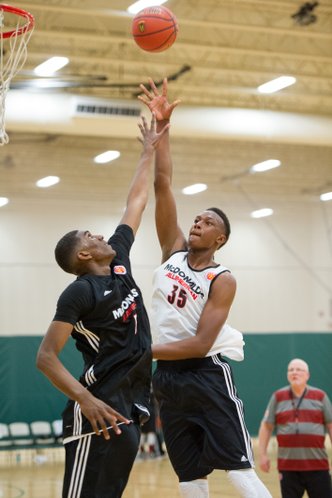 Myles Turner, a 7-foot center from Trinity High, in Bedford, Texas, and the only uncommitted player participating in the McDonald's All-American game, takes a jump-hook during practice on Sunday in Chicago — three days before the McDonald's All American Game.

Myles Turner has heard the talk that his college choices are down to Kansas University or Texas.

It did not originate from Myles Turner, nor, the highly ranked basketball recruit said, any representatives of Myles Turner.

“There are three people in my circle and I keep it real tight,” Turner said, referring to himself and his parents. “Alternative sources, you never know what they might want out of it or who they know or what their ulterior motives are. Keeping a tight circle is very key in this whole process.”

Be sure to check out the McDonald's All American Game photo gallery, and some behind-the-scenes practice videos, too.

If I'm on the advising committee for Turner, here's what I say:

Announce for KU now. If JoJo stays, you'll work every day against a future number one draft pick in practice. You will get better, fast. Self will play you - the minutes will work themselves out - they always do - and you'll be poised for a great future. KU big men always improve and always get drafted high. Don't overthink it. Go where you know things always work out well.

haha..that's funny. Turner is OAD. He may or may not come to KU, but he's not looking to play in anyone's shadow. Self himself said it- with JoJo on the squad, no point on having Turner.

but if jo jo does come back who starts at the 4 ellis or alexander? as much at you get from perry on the offence side(some nights no all) his defence is horrible (in my best charles barkley voice) every night. and we gotta have people who can gaurd their position. this year we only had wigs and jojo who you felt could hold their man with out help.

exactly..which is why he's go to a school where he can get the opportunity to put up big numbers to be OAD. he's 7 footer which is a rare breed in the NBA. aslong as he puts up decent numbers, he'll go top 10

I totally agree. Turner will get his minutes and practicing everyday with Embiid, assuming he stays, Traylor, Ellis, Mickelson, Lucas will do wonders for his development.

I've seen Turner play a few time and he is a TAD.

...not to mention Alexander!

Turner has shown patience he has a great idea what his options are. I personally think he would like to come to KU, he would play and play a lot for Big Man program, Great coaching, and a chance for some rings. Close to home not a bad thing either. I think it is why he is waiting, to see what Joel does. Otherwise he could just announce, why wait??? I hope our coaches keep texting him Joel updates, even if it is not today Myles but soon. We will test you as soon as we can.

The money is sitting there for Joel, but I have to think he is thinking about that 2nd contract, the one where you "really" get paid in the NBA. I think he is also wondering where he is going to refine his game the most and the quickest, he wants to be one of the best. It will not draw out for than a few weeks, maybe less.

I would love Joel back, but if he leaves and we get Turner, well that will be interesting too.

Yes he does. Frankly, if he were my son, I'd send him to Kansas regardless of what Embiid does. The completion and coaching at Kansas, especially for Bigs, is the best.

I'm really done with all the crap that kusports.com has put up on the website. I don't want to answer any stupid questions just to read an article. I guess I will have to get may Hawks news elsewhere.