The next couple of months figure to be a whirlwind of basketball workouts and anticipation for Kansas University freshmen Joel Embiid and Andrew Wiggins — both of whom opted to leave Bill Self's men's basketball program after one year to enter the NBA Draft.

Between now and June 26, the night of the draft, rumors will fly about each player's stock, which teams like one of them, which teams don't and why one or the other is moving up or down the draft board in a particular front office. That's the life of a top NBA Draft pick, and both Embiid and Wiggins could be off the board by the time the first three selections are made.

As it stands right now, we don't know the order of the first 14 picks. All we know are the franchises who missed the playoffs, and now find themselves in the running for the No. 1 overall pick.

Here are the lottery teams (or the teams that previously traded for a given lottery team's first-round pick) and their odds of obtaining a top-three pick via the lottery, courtesy of Tankathon.com:

The order will be unveiled live on television (probably before a playoff game) at the NBA Draft Lottery on May 20. So we'll have to wait until then to really start pondering which teams will snag Embiid and Wiggins.

In the meantime, we can examine some of the mock drafts floating around online to get early projections. These are more big boards or power rankings when it comes to the lottery at this point, but they still provide some insight.

Kansas center Joel Embiid elevates for a shot over Oklahoma forward D.J. Bennett during the second half on Monday, Feb. 24, 2014 at Allen Fieldhouse. by Nick Krug

Stock assessment: Self said he thought Embiid would be a potential No. 1 pick when he left Kansas — he just didn't know it would be this year. It only took 28 games, and averages of 11.2 points, 8.1 rebounds and 2.6 blocks for NBA scouts to fall in love with KU's freshman 7-footer. Embiid, still relatively new to the game of basketball, developed so quickly in Lawrence, it seems crazy to think his growth won't continue at the next level. Who knows? He could be a once-in-a-generation franchise center.

Potential for movement: You can't do any better than No. 1 in the NBA Draft, and Embiid already is projected as the top pick in one mock. If he slips, it certainly won't be far. With his height, footwork, touch and ability to protect the rim, count on Embiid remaining a hot commodity in the weeks leading up to the draft.

In a column for Forbes.com, Mark Heisler wrote that one "dream" scenario for the Lakers would be "hitting the lottery for a healthy Joel Embiid." If one of the league's most dominant franchises is interested in rebuilding with Embiid, it's safe to assume most teams would hold a similar opinion.

The only wild card that could make some front office types less bullish on Embiid is the stress fracture he suffered in his back this past season, which cost him games. But every NBA team has doctors who can assess for themselves what, if anything, that injury has to do with his future. 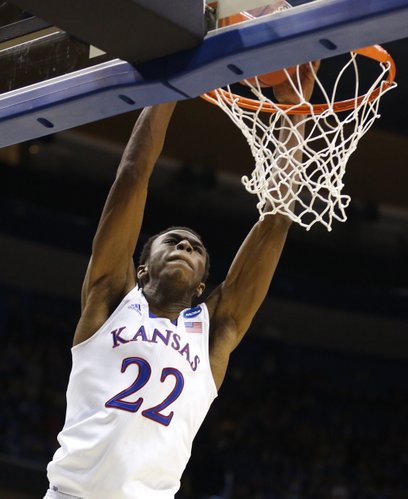 Kansas guard Andrew Wiggins comes in for a dunk against Eastern Kentucky during the second half on Friday, March 21, 2014 at Scottrade Center in St. Louis. by Nick Krug

Stock assessment: Wiggins arrived at Kansas as a known one-and-done commodity who many pegged as the No. 1 pick in the 2014 NBA Draft before he ever played a college game. Though he had his ups and downs in a KU uniform, Wiggins did little to hurt his reputation. Playing in all 35 games, the freshman showed off his length, hops and potential as a legit perimeter defender, all while averaging 17.1 points and 5.9 rebounds and hitting 44.8% of his field goals. NBA execs love potential, and Wiggins, who hit 43 three-pointers, too, certainly has that.

Potential for movement: Like Embiid, Wiggins could very well go No. 1 overall. In that sense, in theory, there is nowhere to go but down. However, it would take something catastrophic, such as an injury, for the explosive young swingman to drop out of the top three or four picks.

If a GM or front office decision-maker falls in love with Embiid or Duke's Jabari Parker, instead of Wiggins, it could come from Wiggins never turning himself into KU's alpha dog during his one season in Lawrence.

In an NESN.com post highlighting some of the questions around this year's draft, the question is posed: Does Andrew Wiggins have the will to win?

Now, those who saw Wiggins try to rally the Jayhawks from huge deficits at Florida and West Virginia probably wouldn't ask that question — he scored 26 in Gainesville and 41 in Morgantown. But that and similar inquiries come up, in part, because Wiggins scored just four points in KU's NCAA Tournament loss to Stanford.

More than three weeks remain until a myriad of ping pong balls determine the order of the NBA Draft. Until that happens, you can go play out different possibilities with ESPN.com's mock draft tool and the help of ESPN Insider Chad Ford.

To give you a sense of the broad range of conceivable selections, I played it three times and got a different outcome for the lottery-bound Jayhawks each time.

Scenario No. 1: Sacramento (4.3% chance to win lottery) hits the jackpot and takes Embiid with the first pick. Boston snatches up Wiggins with the second pick.

Scenario No. 3: Milwaukee (25% chance, best odds in the lottery) is rewarded for its awful season and picks Wiggins first overall. Philadelphia takes Parker second, and Embiid falls into Cleveland's lap with the third pick.

— Draft sites used for the player positioning portion of this blog include: NBADraft.net, MyNBADraft.com, DraftExpress.com, HoopsHype.com and DraftSite.com.

We will never forget that the year we had the two top draft picks resulted in a 10 loss season and round of 32 exit.

With all Embiid's foul trouble early and injury late, we only got to see about 5 complete good games from him. Dakari Johnson, who will be returning to KY next season, must be having some thoughts about the kid he pushed around in Gainesville two years ago.

I'd be more content with no draft picks and a team Final Four. But I always followed college ball.

I just hope all recruits especially Myles Turner will understand that KU had the two top draft picks. I also hope Turner understands where Embiid was and to see him now, has got to be super tempting.

If he goes to KU, he has a great chance of being developed by Self and Hudy. He needs the best strength coach in America to bulk him up just like Embiid. Self prepared Embiid for the NBA and developed him into a top 3 draft pick. Turner could pick, like Embiid if he wants to go OAD or stay a few years, but because he choses, not because Self fails, like Barnes. Barnes will waste him and ruin his draft stock.

Or, he can go to UT, get some minutes, play second fiddle to Ridley and Ebeh, get little to no development, no strength, and play for 2-3 years, then get drafted lower than expected and lose money.

Why the need to tear down another program to try and make KU look better? If your case for your school includes tearing down another school, then your case for your school isn't strong enough to stand on its own two legs. Two of the most high profile players in the NBA playoffs at the moment both went to Texas (Durant and Aldridge) so saying Turner can't have a successful NBA career if he goes to Texas is not a sound argument. Turner will base his decisions on what his priorities are and hopefully KU lines up his priorities better than Texas does.

Great to see all the exposure these two are getting. In a 10 loss season I agree with Suzi it is amazing with so much talent how much we struggled. We need PG help or next year could be a repeat of last year. I was amazed of the step backwards Tharpe took. I now think Turner is 50/50, and Graham sure sounds like he wants to play close to home. Hope something else pops up in recruiting just in case these two fall through.

I still believe Conner Frankamp can and will be a great PG for our Jayhawks ... Most everyone is over looking him but given his performance late in the season just imagine what he could have accomplished if he had been given a chance earlier in the season. Nothing against Tharpe but the most important things you need in a PG are consistency and lack of turnovers. Scoring is a plus but getting the ball to other so they can score easily is far more prefered.