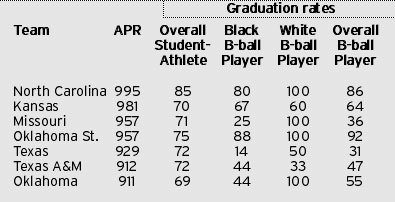 Academic performance information for Big 12 teams in the NCAA tournament. APR signifies a team’s Academic Progress Rate. Teams with APR levels under 925 may be subject to NCAA penalties. Other rates indicated measure teams’ Graduation Success Rates. North Carolina had the highest APR of teams in the 2009 tournament. The APR data used was pulled from data collected during the years 2003-2007. Graduation rates used were calculated using the freshman classes of 1998-99 to the 2001-02 seasons, and allowed six years for graduation.