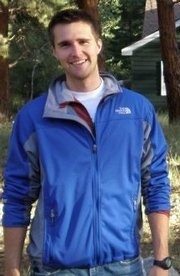 I joined the World Company as a part-time Web producer for KUSports.com in October 2007 and came on full time about six months after that. I now help maintain both KUSports.com and LJWorld.com and report on miscellaneous happenings around Lawrence. I wear enough hats here that if I were to actually physically wear that many hats at the same time, I'd look ridiculous.

I graduated from KU's William Allen White School of Journalism in May 2007, where I did some web production for KUJH-TV, anchoring sports and reporting news for them as well. That gave me the opportunity to follow the Kansas men's basketball team across the country on its run to the Elite Eight in March 2007. I am (unfortunately) a Kansas City Chiefs and Royals fan.

When I'm not at work I try to stay active at the gym and on the basketball court. My favorite season is summer, where I'm outside as much as possible either at Red Dog's Dog Days or training for triathlons, which I started doing the summer of 2009. I've yet to drown, so I'd say it's going well. I enjoy poking around L-Town with friends too.

Kansas forward Carolyn Davis scored 38 points, but it wasn't enough as the Kansas women's basketball team fell to Duquesne, 80-63, on Saturday night in the second round of the WNIT at Allen Fieldhouse.Like so many times this season, Kansas University relied on Carolyn Davis to shoulder the bulk of its scoring. But, like so many times this season, Davis couldn’t get it done on her own.

Hasn't it been too long since we gave some stuff away? We thought so too. Make an amazing KUSports.com sign to win some.

Live from Allen Fieldhouse: Late Night in the Phog

Welcome to the 25th Late Night in the Phog, live from Allen Fieldhouse.

After over twenty years of filling out brackets, Ben Hendricks finally has something to show for it. Hendricks was the big winner in KUSports.com's 2009 NCAA Tournament bracket contest, sponsored by Kief's Audio/Video.

At the 2008 Big 12 Media Day in Oklahoma City, players from around the conference weighed in on which player they liked, other than themselves, to win the conference's MVP award.

So what exacty was Sherron Collins thinking while dribbling the ball up the court in the national championship game, Jayhawks down three points, time winding down?