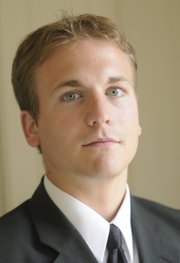 The noise when Bill Self entered Memorial Stadium on Monday was almost deafening. The theme of Kansas University's Traditions Night was "A great place to be a champion," and the men's basketball coach's appearance drove that point home for the several thousand students.

Musicians jump on the KU bandwagon

For the first time in a decade, the small but proud contingent of Marching Jayhawks has exceeded 200 members. Scott Weiss, Kansas University director of bands, said he was thrilled to see such a positive turnout. The Marching Jayhawks band, which has lagged behind other Big 12 schools in the number of students, had 239 show up for registration Friday. Last year, 177 musicians were in the athletic bands. Weiss has his theories for the increase.

Kansas University officials are optimistic that recent academic and athletic success will help bolster enrollment. Although the Kansas Board of Regents forbids Kansas schools from discussing early enrollment numbers until mid- to late September, the school is anticipating a growing freshman class.

Between bouts of rain and trips to the trucks to avoid lightning, Kansas Turnpike Authority workers Wednesday raised a new exit sign to three I-beams along Interstate 70 east of Lawrence.