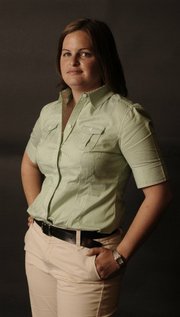 Jaylynn Columbus started to scream when she saw them.

The Insight Bowl pits the Kansas University Jayhawks against the Golden Gophers of the University of Minnesota, but local ties to the Twin Cities run deeper than a football game.Some Minnesota alumni are even teaching Jayhawks.

George Clooney, Samuel L. Jackson, Jennifer Lopez and Free State High special education students have at least one thing in common: They’ve all worked with Keith Loneker. Loneker, 37, has made security rounds at Lawrence High, played librarian for a day at an elementary school and now is a substitute at Free State.

Tuesday was the first time that KU planned a health and fitness day with such a large group. Students in third through sixth grades from all of the city’s 15 elementary schools cheered on the Jayhawks and learned a thing or two about what it means to be a student athlete.

Jayhawks return to kindergarten for a good cause

The kindergarten class at Hillcrest School got three big surprises yesterday, and they were all more than 6 feet tall.

Some New York School students got moving Monday with the help of Kansas University athletes.

6News video: KU fans get back to reality

KU holds the title to two championships this year: the NCAA basketball tournament and the Orange Bowl. But what do fans do now? 6News reporter Lindsey Slater has more.

It looked like a frat house exploded. That's one way to describe the mess of beer cups, beer cans, beer bottles and anything else beer-related you can think of on Massachusetts Street following Kansas University's basketball victory Sunday evening that sent the Jayhawks to the Final Four.

From official NCAA apparel to shirts that bring a little humor to the game, 6News reporter Lindsey Slater found that Jayhawk fans are looking to suit up in full support of their team.