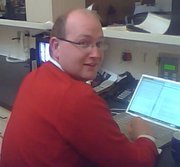 I joined the News Center as a part-time reporter in December 2006 and am now the assistant director of media strategy, a job I took on in June 2010.

In my new role, I'll help launch and nurture some of our newest sites, like WellCommons and Sunflower Horizons, plus others that we're still developing, as well as help relaunch lawrence.com. I'll also help ensure the continued growth, both in traffic and interaction as well as revenue, for LJWorld.com and KUsports.com.

I started as a full-time reporter covering Kansas University, my alma mater, in August 2007 after graduating, and became online editor in May 2008.

Previously, I was editor of my college newspaper and had internships at the Kansas City Star, Des Moines Register and Austin Business Journal. My primary role is to help the staff engage the community via our Web sites, create interactive, multimedia journalism and promote the growth of our online sites.

In my spare time, I like to read books and spend time with my wife and our dog, a border collie-lab mix. I also like to travel and spend time enjoying all that Lawrence has to offer.

You can follow me on Twitter, where I provide behind the scene updates on news and what's going on in Lawrence.

Planned maintenance of our web servers may lead to some brief down time for this website Monday night.

For the second year in a row, President Barack Obama has chosen Kansas as his choice to win the NCAA Men's Basketball Tournament.

With just a few minutes left in Saturday's KU-MU game, fans watching on KCTV in Kansas City as well as KRCG in Columbia, Mo., and KMOV in St. Louis saw CBS cut away from the final few minutes of the game in favor of the Michigan-Michigan State game. KCTV5 apologized to viewers and said that CBS told them the problem related to sun spots causing problems with the satellite feed.

KUsports.com recognized by sports editors' group as one of the top sports websites nationally

KUsports.com was recognized this week as one of the top 10 sports sites in the country by the Associated Press Sports Editors.

KUsports.com, the Lawrence Journal-World’s website dedicated to comprehensive coverage of the Kansas Jayhawks, was honored with an EPpy Award Thursday as the top website in its category.

Kansas University will release the results of an "independent investigation" into the ticket scandal that is ongoing in its athletic department.

Oregon prep star Terrence Jones is set to announce his college choice at 5:30 p.m. Friday and you can watch the entire announcement live on KUsports.com.

In the wake of an ongoing investigation of KU football coach Mark Mangino, and with rumors flying in the media and on message boards, KU Chancellor Bernadette Gray-Little issued a statement this morning indicating her full support of athletic director Lew Perkins.

Investigation of Mangino launched after player complains coach poked him

The Kansas Athletic Department is conducting an investigation of football coach Mark Mangino and the Journal-World has confirmed the investigation began after Arist Wright complained that Mangino poked him in the chest in the days before KU took on Colorado.

The Kansas Board of Regents has OK’d a $34 million addition of seating on the east side of Kansas University’s Memorial Stadium.