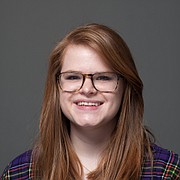 Joanna Hlavacek is the education reporter for the Lawrence Journal-World.

The Jayhawks may not have won the national title in this month’s NCAA Tournament, but the team is still expected to generate some serious cash for making it to the Final Four.

A new partnership between the University of Kansas Student Senate and Kansas Athletics aims to make games at Allen Fieldhouse more accessible to traditionally underserved students.

When the KU football team pays tribute to the Sunflower State’s Civil War heritage in this weekend’s game against Baylor, they’ll also be honoring a Kansas abolitionist fighter with a murky past.

The Lied Center announced on Wednesday a partnership that will pair the Jazz at Lincoln Center Orchestra with, of all things, legends of KU basketball.

Even if Saturday’s first football game of the season (against Southeast Missouri State) doesn’t pan out for the Jayhawks, KU fans may still have occasion to celebrate this weekend.

Next week brings the start of a new football season at the University of Kansas, and with it ramped-up security measures meant to keep fans safe in the wake of on-campus concealed carry.

The Kansas Board of Regents on Wednesday voted unanimously to name a new University of Kansas baseball facility in honor of longtime KU supporter Rich Jantz.