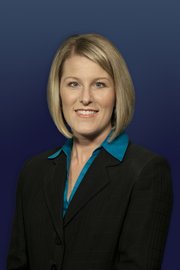 I joined the 6News team after moving to Lawrence in 1998. Since then, I’ve been behind the desk, anchoring either the 6 p.m. or 10 p.m. news. My passion is to be out in the field reporting and doing stories that impact people’s lives. I’ve won several awards for my reporting, including Best Spot News story from the Kansas Associated Press for a 2002 piece I did on a KU student who survived a lightning strike.

I grew up mainly In Naperville, Ill., a suburb of Chicago, and have spent time in Tulsa, Okla., where I was born. That’s why I moved back to the Sooner State to attend college. I received a Bachelor’s degree in journalism from the University of Oklahoma and minored in French. The highlight of my time at OU was playing on the Big 8 Championship soccer team.

After taking some time off to work as a ski instructor in the mountains of Colorado, I went back to school, graduating with a master’s degree from Northwestern University’s Medill School of Journalism.

My first job took me to the Northwoods of Wisconsin, where I worked as an anchor/reporter for WJFW-TV, the NBC affiliate in Rhinelander, Wis. My work experience also includes time at MSNBC during the 1996 Democratic Presidential Convention, working in Colorado Gov. Roy Romer's press office, and serving as a Washington, D.C.-based correspondent for a television station in Fargo, N.D.

When I’m not working, I enjoy traveling and spending time with my husband, our two young sons and our dog, Jack, a Golden Retriever/Cocker Spaniel mix we rescued from the Lawrence Humane Society.

You can follow me on Twitter, where I provide instant updates on news from the courts as well as other news of interest in the Lawrence area.

Lehigh graduate in Lawrence has ‘fingers crossed’ for tonight

On Tuesday a Douglas County District Court judge ordered a man to stand trial on charges of threatening to shoot two women outside Jayhawker Towers.

Maybe it was Sunday’s thrashing of Missouri on the hardwoods that brought up this idea again. City commissioners may soon consider renaming a portion of Missouri Street to honor former Kansas University football coach and eternal Missouri-hater Don Fambrough.

Kansas University basketball player Sherron Collins will get a second chance to defend himself in a civil suit filed against him last year.

As KU prepares for its Orange Bowl appearance, some fans are thinking of a similar game.

400 turn out for Track Legends and Friends

The theme was an evening with Kansas University Track Legends and Friends, and about 400 people turned out to the Lawrence Holidome this evening to see the former Jayhawks that spanned several generations.

Jeremiah Creswell says he didn't do it.

Former Kansas University basketball player J.R. Giddens returned from New Mexico on Monday to resolve his role in the brawl that ended his career here.

Former Kansas University basketball player J.R. Giddens pleaded no contest to one count of battery Monday for his role in the Moon Bar incident in May.