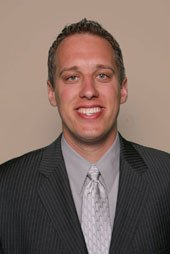 I have always loved sports, and I realized I wanted to be a sports journalist at about the same time I realized I would never be a professional athlete -- in high school. I can't run or jump, but I can write and speak. So, I decided to write and speak about people who can run and jump.

I was born in Lodi, California (little town south of Sacramento), but lived in six different cities around the U.S. before finally moving to Overland Park before High School. I will forever consider Lawrence my true hometown. The seven years I lived in the River City make it the most permanent residence of my lifetime. It's home to my Alma Mater, and it's where I met my amazing wife, Lori.

We were married at Trinity Lutheran Church just off Mass St. in April 2008. Lori and I met at the student TV station while hosting a sports talk show. West Shawnee is where we currently live. My wife works in Kansas City, so we bought our first house in a location that minimized the commute for both of us. I still miss living in Lawrence. We have a weimaraner named Wrigley (see paragraph about my love of the Cubs below) who monopolizes a lot of our time.

I graduated from the University of Kansas in 2005 with degrees in Broadcast Journalism and Political Science. My time at Channel 6 actually started a year earlier when I was hired part-time to help cover high school football. After graduation, I was offered the weekend sports anchor position, and two months later I filled the open 10 p.m. sports anchor job. I continue in that role today, while also hosting The Drive, and doing play-by-play for the Hy-Vee High School Game of the Week.

While working at Channel 6, I have covered four NCAA Basketball Tournaments, three college football bowl games, and nearly a dozen state titles for our area high schools. Obviously, the early part of 2008 stands out as the most memorable time in my journalism career. Covering an Orange Bowl and a National Title run in a three month span is an experience I will never forget.

I also keep busy away from work. I am a below average golfer, a certified scuba diver, an amateur dog trainer, a Lutheran churchgoer, a State Champion high school debater, an award-winning chili cook, the best first baseman co-ed softball has ever seen, and the most bitter Cubs fan of all-time. Other than the KU, I follow all sports Chicago (minus the White Sox). Since I was devoid of a hometown until college, I claim the Second City because it's where my father and grandfather grew up. The Cubs are my true sports passion, and despite my skepticism, I live by the mantra, "It's Gonna Happen."

Kivisto Field gets a makeover

The finishing touches are being put in place at Kivisto Field at Memorial Stadium.

The KU football team is gearing up for the upcoming season with its summer camp. The season officially begins in less than three weeks.

Area golfers invited to tee off with Bill Self

Once again, it's time for Bill Self's annual golf tournament.

The KU baseball team is off to Lubbock, Texas, to face the Texas Tech Red Raiders.

Kansas men's basketball recruit John Wall still hasn't decided on which school he will commit to.

The Kansas women's basketball team will take on New Mexico State on Sunday at Allen Fieldhouse.

Kansas University takes on the Texas Longhorns Saturday, and quarterback Colt McCoy will be in the Jayhawks' sights.