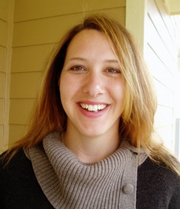 I am a special projects reporter for the Lawrence Journal-World. Since coming to Kansas in March 2007, I’ve worked on projects that ranged from tracking hundreds of sexual assaults in Lawrence to covering the state’s emerging wind industry.

On Saturdays I am a general assignment reporter, which means you can find me around town reporting on parades, animal shows and breaking news. So, if you have anything fun happening that day of the week, let me know.

I grew up in central Pennsylvania where I made my journalism debut in second grade. I wrote a Thanksgiving short story (as in three paragraphs) on Tom Turkey that was published in our small town newspaper. It’s my only newspaper clipping that is laminated.

I still haven’t gotten over the rush of seeing my name in print. After high school, I went to Lehigh University and graduated with degrees in journalism and economics.

My first newspaper job was in Steamboat Springs, Colo., where I covered everything from high school football to ski town politics. Later I moved to Bend, Ore., to work as a city hall reporter for the The Bulletin.

So far, my journalism career has sent me up a hot air balloon, to the middle of a burning house and on the trail of a tornado. But even better, it is a job that gives me the chance to meet people from all walks of life who have amazing stories to share.

When not in the office, I am usually outdoors running or biking. And, when the stars are aligned and Kansas is graced with enough snow, you might even catch me cross-country skiing.

Snow showers only dampened the mood of Jayhawk fans who poured out onto Massachusetts Street Sunday after Kansas University’s heartbreaking loss to Virginia Commonwealth. “Just another March Madness let down,” Andrew DeBoest said.

No major injuries were reported during a three-alarm fire that broke out Tuesday morning in a HVAC unit attached to one of Kansas University’s sports facilities.

Getting around on game day

Hey, Jayhawk football fans, it’s time to get your game face on.

A special view on Game Day

When Denise DeBrine and her son Jackson heard they were going to get upgraded to the “cushy seats” at Saturday’s Kansas University football game, DeBrine was expecting the ones that folded out with pads.

It might have been a different basketball team in a different tournament from what most Jayhawk fans were accustomed to cheering for this time of year. But that didn’t stop a huge crowd from pouring into Allen Fieldhouse on Saturday afternoon to watch Kansas University play the University of South Florida in the championship game of the Women’s National Invitation Tournament.

Bad weather across Kansas forced the Kansas men's basketball team's flight back from Indianapolis to be diverted again, this time to Kansas City International Airport. They arrived in Lawrence a little after 2 p.m. Saturday.

It was all band, almost all the time at Saturday’s Kansas University men’s basketball game. A switch to more recorded music over the loudspeakers and less band music at Wednesday’s game versus Iowa State had some fans worried that KU’s basketball tradition was being tainted with NBA-style shenanigans. But the tune changed on Saturday.

6News video: KU football team off to best start since 1899

America was at war. The Eldridge Hotel had just been remodeled. Voters approved a new school and a new courthouse. And Kansas University's football team was 10-0. The year: 1899. The last time that Kansas University's football team went undefeated for so long, a "good meal" at a downtown restaurant cost 15 cents, a teenage trend of "progressive buggy rides" was emerging and Lawrence streets were being paved for the first time with brick.