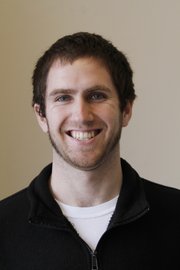 I was born and raised in Overland Park as the only child of Glen and Hilary Duderstadt.
After graduating from Shawnee Mission West High School in 2009, I attended Baker University. I ran cross country and track for four years at Baker, and joined Delta Tau Delta fraternity.
While running and joining a fraternity required a lot of time commitment, the bulk of my schedule revolved around my work with the Baker Orange newspaper. I was the sports editor of the Baker Orange for my sophomore and junior years before becoming the editor-in-chief as a senior. I reported on every sport Baker had to offer with the exception of cross country and track since I competed in them.
I graduated from Baker in May of 2013 with a degree in mass media, and moved to Orlando the day after to begin an internship with the Sanford River Rats of Florida Collegiate Summer Baseball League. At the conclusion of the Florida League season in August, I was named the FCSL Journalist of the Year at Tropicana Field, home of Major League Baseball’s Tampa Bay Rays.
I have stayed true to my Kansas City roots as a fan of the Royals, Chiefs and Sporting KC. Although Sporting KC has been the only one of the three to have any postseason success during my 23 years of life, my fingers are crossed for the Royals to finally earn a playoff berth and for the Chiefs to pull out their first postseason win since I was 2.
Along with working as a part-time copy editor at the sports desk, I also help out with reporting assignments as needed. I am also the house director at Delta Tau Delta at Baker and plan to help out with the BU cross country and track teams as my time allows it this year.

The Kansas Barnstormers game served as the best of both worlds for Kansas senior basketball player Clay Young on Saturday at Lansing High School. Young teamed up with fellow former Lansing stars Khalil Bailey and Dontae Gibson, as well as KU seniors Devonte' Graham and Svi Mykhailiuk to lead the Barnstormers to a 118-96 win against the 810 Varsity All-Stars.

As Kansas sophomore guard Malik Newman looks to continue building his lofty March Madness résumé, he's taken some time to reflect on some of his favorite memories of watching postseason college hoops while growing up. Newman has idolized Charlotte Hornets star Kemba Walker, who led UConn to Big East and NCAA titles in 2011.

For the first four minutes of the Kansas women's basketball team's 83-48 loss to No. 6 Baylor, the Jayhawks went possession-for-possession with the Big 12 powerhouse on Saturday at Allen Fieldhouse. By Chris Duderstadt

Kansas junior Kylee Kopatich dished out a career-high nine assists, and was one of four Jayhawks in double figures in their 86-77 win over TCU on Sunday at Allen Fieldhouse. Four Jayhawks scored in double figures between Christalah Lyons (18 points), Kopatich (17), Brianna Osorio (15) and Austin Richardson (10).

Each college football bowl season has its fair share of feel-good moments, and Lawrence native John Mumford is looking forward to being a part of one on when New Mexico State takes on Utah State at 4:30 p.m. CST Friday in the NOVA Home Loans Arizona Bowl on the CBS Sports Network.

Kansas redshirt sophomore Sam Cunliffe has remained in close contact with his eight sisters since transferring from Arizona State last winter, and has developed a brotherly bond with Mitch Lightfoot to help make him feel at home in Lawrence. By Chris Duderstadt

Kansas junior Kylee Kopatich scored a career-high 26 points to power the Kansas women's basketball team past Arkansas, 71-60, on Sunday in the Big 12/SEC Challenge at Allen Fieldhouse. Christalah Lyons and Tyler Johnson joined Kopatich in double figures with 15 and 10 points, respectively, to help the Jayhawks improve to 7-0.

In the zone: Stifling defense guides KU women to 72-37 win over Texas Southern

After a strong first quarter sparked the Kansas women's basketball team to an 18-point victory over Campbell in the Jayhawks' season opener on Sunday, Brandon Schneider's squad used a big second quarter to pull away from Texas Southern in a 72-37 win over the Tigers on Wednesday in Allen Fieldhouse. By Chris Duderstadt

KU volleyball swept by Creighton for first loss of season

After picking up wins over nationally-ranked opponents in No. 13 Kentucky and No. 17 Purdue earlier in the week, the No. 7 Kansas volleyball team had plenty of confidence that it could exact some revenge No. 9 Creighton to round out the Kansas Invitational on Saturday at the Horejsi Family Athletics Center. KU hadn't lost since dropping a five-set thriller to the Bluejays in the second round of the NCAA tournament at Horejsi, but Creighton continued to be a thorn in the Jayhawks' side on Saturday by coming away with a sweep, 25-20, 25-16, 29-27.