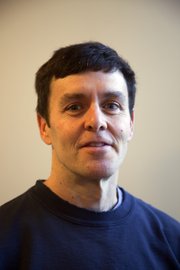 Andrew was born and reared in Overland Park, but he has lived most of his life in Lawrence.
Andrew put himself through Kansas University by sacrificing nights and weekends to a part-time job as a sports writer at the Journal-World. After five years of KU toil, he was offered a full-time gig at the J-W, and it proved to be an offer he couldn't refuse.
In his two-plus decades of Journal-World servitude, Andrew has covered everything from preps to pros, from archery to wrestling.
He currently is associate sports editor, a fancy title meaning he can sacrifice his nights and weekends to help produce the Journal-World sports section. He also regularly writes a blog on the joys and challenges of commuting by bike called Rolling Along.
Andrew and his wife, Janice, have two children, Carlyn and Brooks.

Since Maggie Hull-Tietz played her last softball game for KU a couple of months back, she joined the elite ranks of professional softball players, added a husband and a hyphen, took a quick two-week honeymoon, then reported back to her Bandits team, where she and her teammates found themselves title-hunting in National Professional Fastpitch. By Andrew Hartsock

A new beginning: Darius Willis thrilled to be at QB, er, LB for KU

It didn’t raise so much as an eyebrow when Darius Willis reported to Kansas University’s preseason football drills sporting a new number.

DE Kevin Young looks to break out, with help from Laptad

Kevin Young hasn’t played so much as a down of major-college football.

After talking about themselves, their positions, their new coaches and just about every other aspect of Kansas University’s football program, several Jayhawks were asked about John Williams.

Darius Parish played in 12 games on Kansas University’s defensive line as a true freshman two years ago. Imagine his surprise, then, when halfway into his red-shirt season last year, coaches came to him and suggested — in the way that college football coaches often “suggest” things — that maybe, perhaps, Parish and the Jayhawks better would be served with Parish on the offensive line.