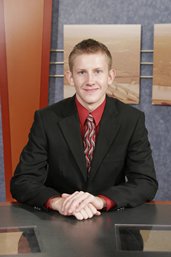 At what moment did you realize you wanted to become a sports reporter? And if there wasn't a
specific point in time, what was the motivating factor?

In high school, I realized I wasn't going to be a pro athlete and I didn't
have the patience for law school. So I figured why not cover sports for a
career?

When you really want to relax and let your hair down in Lawrence, where do
you go and what do you do ?

Hang out with coworkers at a local pub. Also drive around in my car to blow
off some steam. Tennis helps me do that as well.

What comes to your mind as the most memorable local story you've covered?

Probably the local fundraising efforts for Hurricane Katrina. The Lawrence community has been so generous to those effected.

If you couldn't be a reporter, what occupation would you want to try?

Which two people do you admire most? One should be someone you know. The
other, someone you've never met.

One person I admire the most is my dad. He has taught me a lot about life
and worked hard to make sure I didn't turn out to be a bum. The other person
would be Cal Ripken,Jr. Even though he played a game for a living, he still
came to work and did his job thousands upon thousands of times without
slacking off for a day.

If you were stranded on a desert island with only one song to listen to and
one book to read for the duration, what would they be?

Dream On by Aerosmith. The book would probably be The Purpose-Driven Life. I've read some of it but if I were deserted on an island I'd probably have a few minutes to read it all.

If they were going to execute you tomorrow, rightly or wrongly, what would your last meal consist of?

Start out with some spicy buffalo wings. Then move on to a nice ribeye steak (medium rare). Then top it off with a brownie ice cream sundae.

Last season, the Kansas Football team's record could have been 10-2. That is if the Jayhawks colud have held on to a 4th quarter lead. Four times in 2006, KU was on top heading into the final frame before blowing it.

After four practices into the 2007 KU football season there are plenty of questions to be answered.

One year ago, KU shortstop Ritchie Price was selected in the 18th round of the Major League Baseball Draft by the New York Mets. Just one year removed from the Hill, Price's playing days are now over.

The boys of summer played on as KU coach Ritch Price hosted the Jayhawk All-Star Baseball Camp. Over 200 kids age 10 to 18 came to campus this weekend for the three day event.

While the weather outside may feel like summer, the gray skies this afternoon had the look of an overcast autumn day, and you can't think about fall without thinking football. It's been eight months since the Kansas football team fell to Missouri in the Border Showdown sealing the end of the 0-6 season

The Kansas football Ring of Honor will add its' 14th member on September 1 when the Jayhawks take on Central michigan. KU defensive legend Willie Pless will be added to the wall at memorial Stadium.

One was named the co-Big 12 Defensive player of the year, the other was named to the Big 12 All-Rookie team. Together the KU guards Mario Chalmers and Sherron Collins will try to earn spots on the U.S.A. Pan American games team later this month.

6Sports video: Teahan hopes to make most of opportunities at KU

After turning down several scholarship offers from several Division I mid-majors Connor Teahan decided to attend his dream school instead. The Rockhurst High product, however, wants to be more than just a walk-on at Kansas. His goal: contribute meaningful minutes.

Last night, former KU guard Julian Wright was the lucky 13th player selected in the 2007 NBA Draft by the New Orleans Hornets. Today, the Noodle arrived at his new home. Wright went to the New Orleans YMCA in a limo and was greeted by dozens of fans and even a brass band outside the gymnasium. Inside, more fans greeted their newest player.

Darrell Arthur continued tryouts for the under-19 USA basketball squad in his hometown of Dallas, Texas. The 6-9 sophomore, along with 17 other players, is in the midst of three days of tryouts before the final roster is trimmed down. The players who make the team will head to Serbia starting July 12 for the World Championships.