What was the top KU basketball moment of 2012?

You guys give mizzery too much credit..

What do you expect they raided into our town and killed innocent women and children.

Getting to the final four was great... but the situation and the mood of the Missery game was too good. The fact that we blew the game in Columbia, Missery was incredibly arrogant that year, and the fact that we were down the whole game, and T--Rob (one of the most loved players of all time) had not only tied the game with a 3 point and 1... but also had the block on the other end. So many things set the table for what was a really memorable game.

Anytime KU advances to the National Championship game is cause for celebration, only to be trumped by a NC itself. That's what KU BB is all about> championships. Add up the championship wins and appearances, we trail only UCLA. I was in 'Nawlins and it was electric, but was not at the MU win so I can't actually compare. Again, KU is about real accomplishments and a NC game appearance and Final Four WIN are statistics the NCAA keep track of. And, I agree with KUKRU, voters gave too much credit to MIzzery. 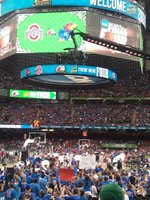 It wasn't because it was mizzery so much as it was coming from 19 points behind. It being mizzery just made it all the better.

It's called a rivalry. That's what is up with the KU faithful. And because it was Mizlose, and we own bragging rights for having won the last game while in conference forever. And btw, if it's not Mizlose the vote isn't even close. An all out conference championship was also on the line. Had we won the National Championship I also think the vote isn't close. The votes would go to the NC game.

They don't hang banners for regular season games, so I said UNC.

I wonder how many of the posters who can't understand why a KU fan would rate a win over Fizzou above Final Four related games are themselves from Mizzouri. I imagine a win related to the Final Four would be Nirvana to them having.... never been there before. All I can say is been there done that. I will fondly recall every win over MOoooo.........It was a great rivalry.

This isn't just any normal regular season game. This is the last time the biggest rival in the history of the program enters Allen Fieldhouse. The emotions of that alone were off the charts. Couple that with a dramatic down-by-19-in-the-second-half victory, and it was one of the greatest, if not the greatest moment in Allen Fieldhouse.

It's not as if those post-season wins were unimportant, but you're dramatically underestimating the significance of the Mizzou game.

Since I have relocated to "Tobacco Road", nothing, not even wins over Mizzou or the Mildcats, hold a candle to beating Roy and his carolina blue one and doners. If you lived here, you would understand. I tell all of these TarHeel, Dookies, Deacons and Wolfpackers that Carolina will NEVER beat the Jayhawks as long as HCBS is still on the Hawk bench and ole Roy is still on the 'blue' bench. Roy had a spell cast upon him when he left. I was upset until they hired Self and in about 10 minutes after that, I could care less what Roy does or where he goes!! I followed Self all the way from Oral Roberts and it was, bar none, the best hire in the history of the program! IMO of coures! RCJH

This is stupid, we don't care about MU, National Championship. There should be no street in LA called Missouri, get rid of it! Can't wait until Tourney time and if we are in their bracket, sweet.

Very close. Clearly the better accomplishment was getting to the National Championship game (and I was in AFH watching it on the scoreboard). But the best moment for me was the Missouri game. The atmosphere in the Fieldhouse that day was like nothing I have ever experienced. So many factors came together: Missouri had beat us earlier in the season, this was the final game in the most hate-fuelled rivalry in college sports being played in the best venue in all of sports, the pre-game build-up was epic even by AFH standards, the roller coaster of emotions as KU fell so far behind and were being embarrassed at the beginning of the 2nd half, the ridiculous comeback, T-Rob's block (without a doubt the loudest sound I've heard in my life came in that moment), the struggle and final victory in OT. No one left after the game was over for 2 hours after the game random people were just walking around hugging each other. There were tears everywhere. Security guards were crying and high-fiving people. It was the best moment of the season.

You just had to be there to understand.

I guess the Miz voters didn't have faith enough to join us in NOLA or they'd know better.

Because it was the last time Mizzu will EVER play in AFH, and the way the game ended, it got my vote. Tiebreaker was Coach Self's emotional reaction at the buzzer. NEVER seen him show that much emotion...

This just shows how good we are... Once again, the tournament is a joke. We are the best team in college basketball since the Bill Self Era began, hands down. How many BCS Championships would we have if the tourney was replaced with the football system that always matches up the best teams? back-to-back in 2010 and 2011 with sheron, cole, and the twins. back in 2007 and 2008 we would have been in a top-4 play off also. This is the year we get our second title with our-Self but that's just officially... I saw Tyrell Reed getting a burrito at Freebirds and I told him that he's a three time national champion in my book! I just really hope we get to lay Duke in the Championship, I know we can take them if we don't slip in the early rounds.

The final game ever in the rivarly, in AFH, and the way it went down. Come on, no contest.

It can be tough to choose from the three biggest moments of that magical season.

For emotion, I give it to beating MU the last game in our series. If you've seen the clip of Bill Self's face and fist pump when the game ended you know is was a huge moment for him!

Final fours are HUGE and I rate that #1 as that is how the rest of the world measures you next to the Champions. I don't hold as much against Roy as others. I was in SA for the 2008 Championships and remember him wearing the Jayhawk sticker. I was very happy to reach the final four last year and really loved that team. Too bad they couldn't handle UK. So for the statistics, I'd put Final Four ahead of reaching the championship game because it is seldom in the conversation later on. It goes Champion, Final Four, Conference Title in my book. Big 12 Tourney record and overall record are a bit like window dressing in my book.

Again, emotion wise, it was beating MU that last game for me, and I wasn't even withing 800 miles of AFH. I envy those of you who were there!

If one of the choices had been "National Championship win over Kentucky", then I would agree with those who are complaining about the fact that the Missouri game is getting the most votes.

But we didn't win a title last year.

Given that fact, I don't think you can call yourself a true KU fan if you don't think all the implications that accompanied that win over Missouri trump the enjoyment of returning to the Final Four game. If you can stomach the idea of our playing rivalry with Missouri ending with us going 0-2 to the former slavers, if you don't get caught up in the pure magic of one of the toughest KU teams of all time coming back from 19 down to win at home in the final matchup EVER (or for a long time, unless we happen to meet in the NCAA tourney) between two of the most bitter rivals in the country, then I don't know what to tell you. Add to the fact that it finished with our best player doing the things that mattered most to win the game and it's an easy choice for me.

Ultimately, what it boils down to for me is how I would have felt had we lost any of the three games that were given as options above. In order of most bitter taste in my mouth if we lost, I'd have to rank those games: 1) Missouri, 2) UNC, 3) Ohio State. By the time we were playing OSU, we were playing with house money--no one expected us to be in the Final Four last year, let alone the title game. Losing to UNC is tough because while I don't begrudge Roy for his choice, I still like the idea that he can't beat us because he still has strong emotions for the school that gave him his big break and had a wonderful marriage for 20+ years. And losing to OSU would have been no fun, but you still can come away saying "we went to the Final Four again!".

As others have noted, I think the difference in the three wins can be perfectly summed up by Bill's reaction to them. There is no doubt that he was the most fired up after the Missouri win, because Bill understands the non-basketball aspects of it and why it's so important to KU and MU fans.

Hark ye, "REAL_DEAL, keep this sort of comment up and you will be known henceforth as the "REAL_SCHLEMIEL."