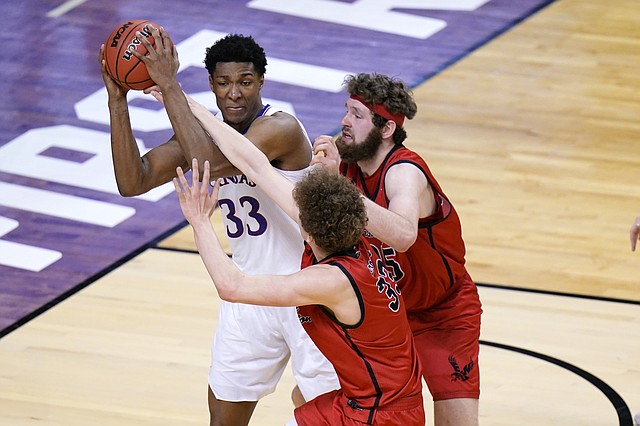 Eastern Washington forward Tanner Groves (35) is pressured by Kansas guard Christian Braun, left, and Kansas guard Bryce Thompson (24) as he goes up for a shot during the second half of a first-round game in the NCAA college basketball tournament at Farmers Coliseum in Indianapolis, Saturday, March 20, 2021. (AP Photo/AJ Mast)

Behind gutsy performance from David McCormack, Kansas escapes with 93-84 win over Eastern Washington in NCAA tourney

The KU big man who finished Saturday’s game with 22 points on 9-of-15 shooting to go along with nine rebounds and a pair of steals, followed a similar routine whenever he checked out during his 25 monster minutes off the bench in Saturday’s win that sent Kansas (21-8) to Monday’s second round. Matt Tait