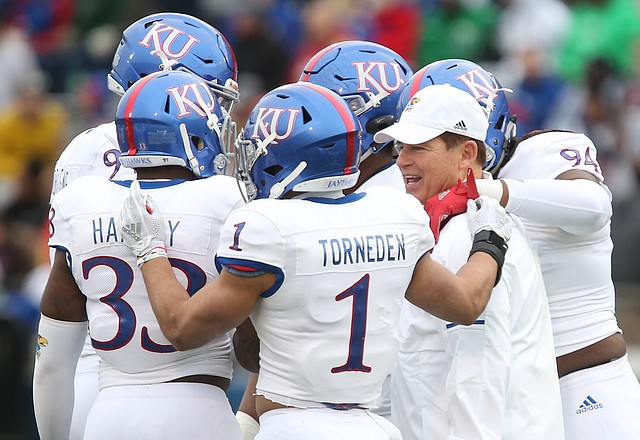 Kansas head coach Les Miles hops in the huddle with Bryce Torneden and the defense during Late Night Under the Lights on Saturday, April, 13, 2019 at Memorial Stadium.

Just as he did at the conclusion of his new program’s spring practice schedule a few months back, Les Miles reiterated recently his hunch that the first team he’ll coach at KU has “a better talent base” than the one he led at Oklahoma State in his debut season as a head coach 18 years ago. By Benton Smith

Once the first weekend of the college football season arrives, eager University of Kansas football fans won’t have to sit around all Saturday waiting for the debut game of the Les Miles era. By Benton Smith

As soon as the spring game ended, Kansas safety Bryce Torneden rushed back to the locker room to take a shower. He, along with the rest of his KU teammates, eventually made it back to David Booth Kansas Memorial Stadium. By then, a stage had been set up near midfield for Rick Ross. But, as so often is the case, it didn’t take long for head coach Les Miles to steal the show. Shane Jackson