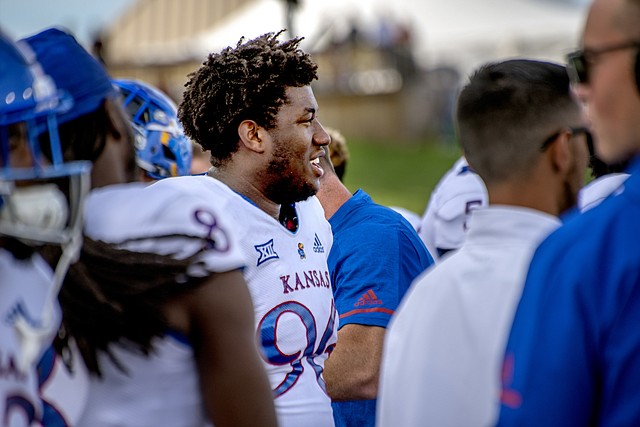 For most of the first five games of the season, Kansas defensive tackle Daniel Wise’s contributions came more schematically than statistically. According to KU head coach David Beaty, it was during the week of WVU preparation that the coach let Wise know the Jayhawks needed more. By Benton Smith

When Daniel Wise hurt an ankle badly enough to limp off the field this past Saturday during the Kansas football team’s home game against Rutgers, the redshirt senior defensive tackle was adamant about checking back in. By Benton Smith

So many times KU defensive standouts Daniel Wise and Joe Dineen set their minds on carving out ways to bounce back from losses, and far more often than not those endeavors ultimately didn’t produce the victories they kept chasing. However, Wise shared following the Jayhawks’ 31-7 win at Central Michigan, that it seemed to him right after KU’s Week 1 loss to Nicholls State that their latest rebound attempt would prove different. By Benton Smith