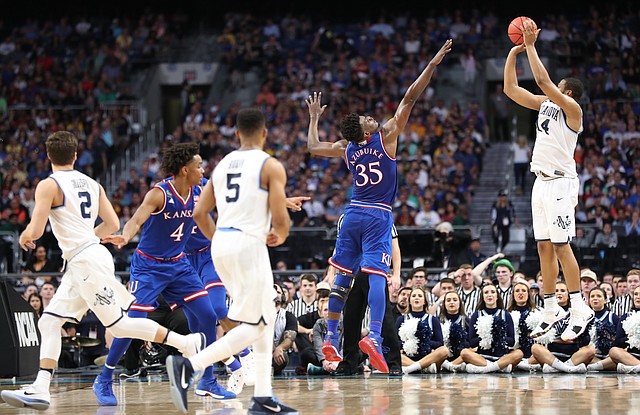 Villanova forward Omari Spellman (14) pulls up for a three against Kansas center Udoka Azubuike (35) during the second half, Saturday, March 31, 2018 at the Alamodome in San Antonio, Texas.

Although it still stung, Kansas coach Bill Self found a pleasant surprise while rewatching KU's Final Four loss to Villanova

Kansas coach Bill Self and Villanova coach Jay Wright have differing thoughts when watching the replay of last year’s Final Four meeting between the two programs in San Antonio. And they might not quite be what you would expect. By Matt Tait

Rematch with Villanova slated for Dec. 15

As always seems to be the case, the Kansas men's basketball team will tackle another tough non-conference schedule during the 2018-19 season. Six teams on KU's non-conference schedule — released Friday afternoon — competed in the 2018 NCAA Tournament. National champion Villanova, Kentucky, Michigan State, Arizona State, Tennessee (possible opponent in the Preseason NIT) and New Mexico State are all slated to square off with the Jayhawks this coming season.