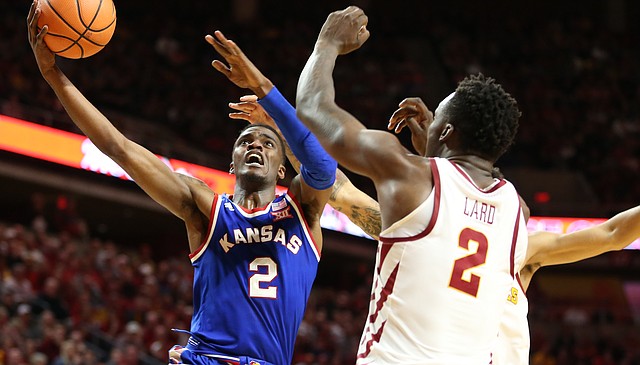 Kansas guard Lagerald Vick (2) gets to the bucket against Iowa State forward Cameron Lard (2) during the second half, Tuesday, Feb. 13, 2018 at Hilton Coliseum in Ames, Iowa.

The first time Iowa State faced Kansas this season, they put 6-foot-9 freshman power forward Cameron Lard on 6-foot-3 shooting guard Malik Newman and dared the Kansas sophomore to beat them. Newman did, scoring 27 points on that early January afternoon to lead Kansas to a five-point victory. Tuesday night at Hilton Coliseum, the stage was set for a similar matchup, and this time Iowa State coach Steve Prohm elected to put Lard on KU's slumping junior Lagerald Vick instead of Newman. By Matt Tait