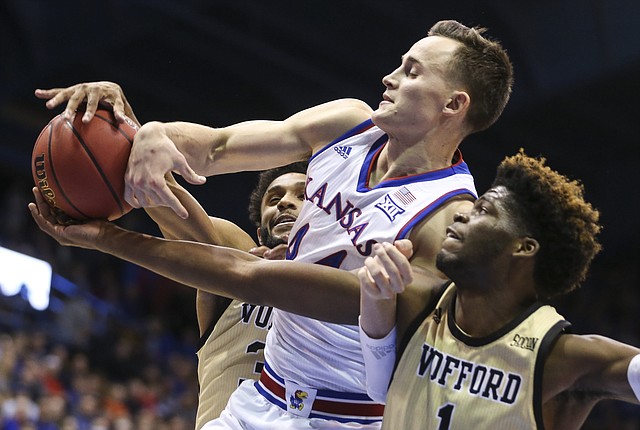 Kansas forward Mitch Lightfoot (44) battles for a ball with Wofford forward Chevez Goodwin (1) and Wofford guard Donovan Theme-Love (31) during the second half on Tuesday, Dec. 4, 2018 at Allen Fieldhouse.

Trip to ASU bit of homecoming for Lightfoot

KU backup big man Mitch Lightfoot understands his minutes don’t come with any guarantees. And the 6-foot-8 junior often thrives within his role, because he has a “make the most out of it” mindset when checking in off the bench. By Benton Smith

His front-court teammate called him the player of the game and, not five minutes later, his coach said he was merely OK. That was Kansas junior Mitch Lightfoot’s Saturday night during the Jayhawks’ 63-60 squeaker against New Mexico State and few players on this KU roster are better equipped to handle that kind of hot-and-cold critique about the same body of work. By Matt Tait