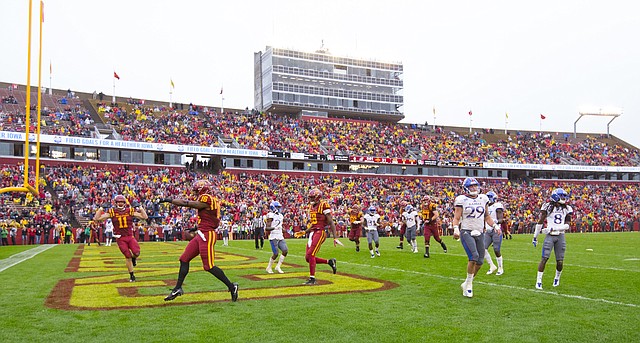 Kansas linebacker Joe Dineen Jr. (29) and the Jayhawks show their frustration as Iowa State wide receiver Marchie Murdock (16) runs in another touchdown during the third quarter on Saturday, Oct. 14, 2017 at Jack Trice Stadium in Ames, Iowa.

Can KU football lay another streak to rest?

Especially for the players who have suffered through the program’s struggles the longest, burying KU’s 46-game road losing streak in Mount Pleasant, Mich., and delivering consecutive victories for the first time since 2011 felt meaningful. Now there is another streak for the Jayhawks to vanquish. And redshirt senior linebacker Joe Dineen didn’t need to hear the entirety of a question earlier this week to identify it. By Benton Smith

Tom Keegan: Cyclones in a blowout; Jayhawks in a tailspin

A dreary, rainy day in the Big 12’s northern-most outpost took a turn for the worse when a football game started and a Keystone Cops routine broke out at Jack Trice Stadium, home of Iowa State’s tough, disciplined, steadily improving football team.