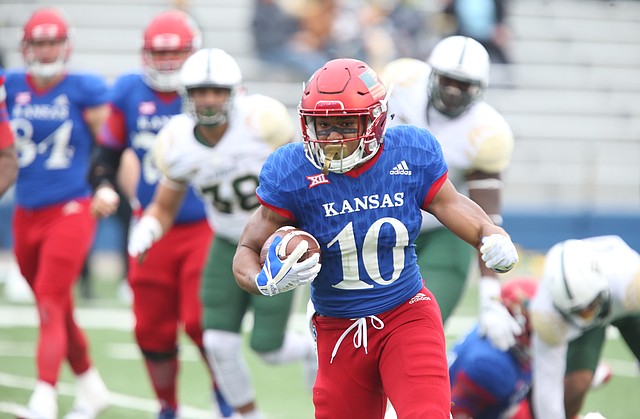 Kansas running back Khalil Herbert (10) takes off on a run during the third quarter on Saturday, Sept. 4, 2017 at Memorial Stadium.

'I don't expect Khalil to be with us': Jayhawks weigh in on RB's absence

All signs point to Khalil Herbert’s Kansas football career being over. While no one within the program, including head coach Les Miles, would offer up that exact information Monday, the picture painted by the words of Miles and two veteran captains was one that doesn’t include Herbert. By Benton Smith

Through three seasons of the David Beaty era, the University of Kansas version of college football’s trendy Air Raid offense has failed to yield the type of results that would make the program competitive, let alone turn it around. It seems this fall the embattled head coach might be through trying to prove KU can produce an effective passing attack. By Benton Smith