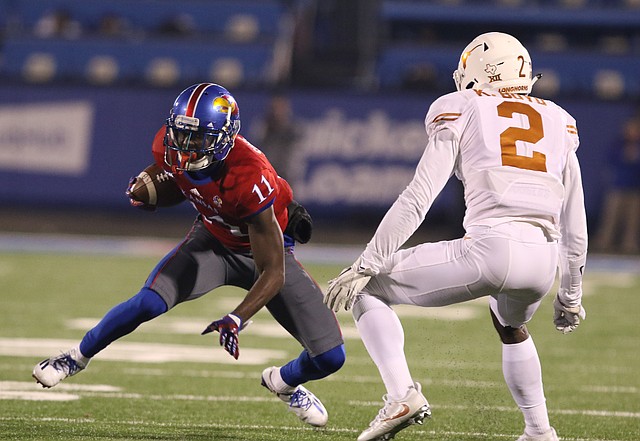 The most successful veterans on the Kansas football roster, such as junior receiver Steven Sims Jr., will rightfully tell you a nearly year-old result won’t determine the outcome of Saturday’s rematch against Texas. Still, a notion exists that the familiarity and favorable associations with the Longhorns could prove beneficial for the Jayhawks. By Benton Smith

For the Kansas football fan who likes to plan ahead, the program on Thursday, with five games remaining in 2017, unveiled its official 2018 schedule, which includes a holiday weekend twist. By Benton Smith

Among all the words offensive coordinator Doug Meacham has used since accepting his position at Kansas to describe what type of weapon junior receiver Steven Sims Jr. can become in his Air Raid system, three stand tall above the rest. Makes. You. Miss. By Benton Smith

Mistakes won’t cut it for Kansas football on the road against K-State (6-4 overall, 4-3 Big 12). With that in mind, the possibility of a special teams blunder inspired Beaty to make a change on KU’s punt return team. Junior LaQuvionte Gonzalez, who muffed a catch each of the past two weeks and has lost four fumbles on the season, is out. By Benton Smith