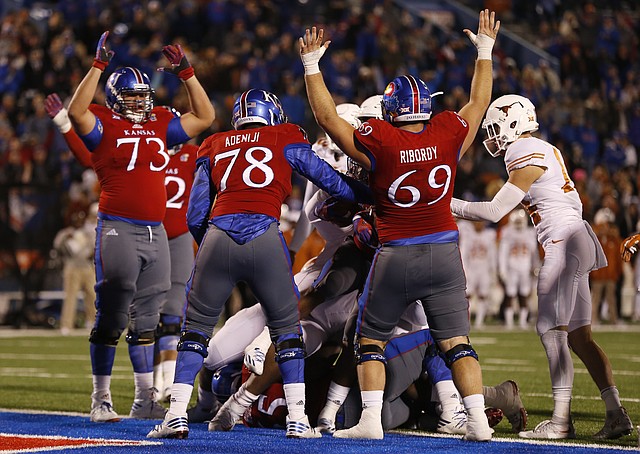 The Jayhawks signal a touchdown by Kansas running back Khalil Herbert (10) during the fourth quarter on Saturday, Nov. 19, 2016 at Memorial Stadium.

Just as he did a year ago, ahead of his junior season, Kansas tight end Ben Johnson found his name on the John Mackey Award preseason watch list Tuesday, when the rundown of college football’s best at his position was unveiled. By Benton Smith

A pair of Class of 2015 offensive linemen from Kansas, one from Louisburg, the other Overalnd Park, didn’t receive any scholarship offers to play Div. I-A football and read those snubs the same way.

Just one season into his college football career at the University of Kansas, sophomore offensive lineman Mesa Ribordy finds himself on the Rimington Trophy Committee’s spring watch list, tracking Division I’s top centers for the 2017 season. By Benton Smith