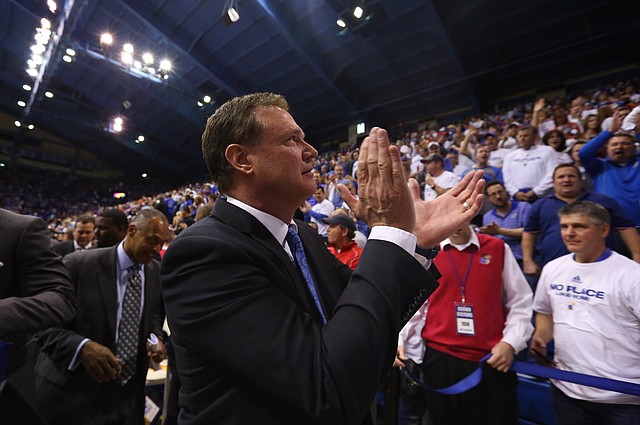 Kansas head coach Bill Self claps as he leaves the court following the Jayhawks' 90-84 win, Saturday, Jan. 30, 2016 at Allen Fieldhouse.

Self: Newly formed Commission on College Basketball will provide 'long-term benefit of our sport'

NCAA president Mark Emmert on Wednesday announced the formation of a Commission on College Basketball, which will be headed by former Secretary of State Condoleeza Rice. By Matt Tait

In addition to running his team through Boot Camp and spending the bulk of the past couple of weeks on the road tracking targets in the Class of 2017 and beyond, Kansas basketball coach Bill Self found time to offer up a state of the union regarding KU’s current recruiting. By Matt Tait

Self talks up KU-KSU rivalry

Kansas University basketball coach Bill Self, who has one scholarship player and three walk-ons from the state of Kansas on his 2015-16 roster, makes sure his out-of-state Jayhawks know the history of the Sunflower Showdown.