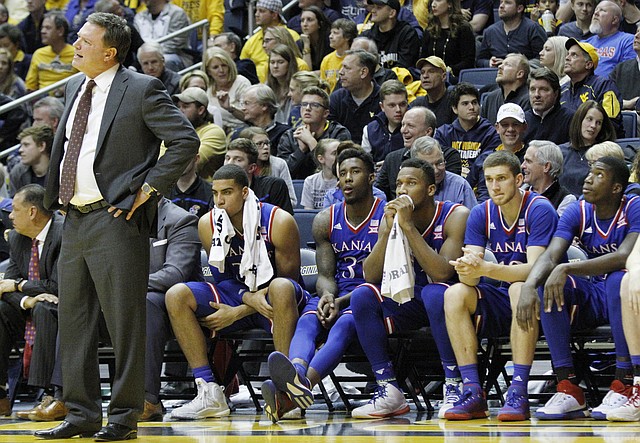 Kansas coach Bill Self and the Jayhawks bench watch the closing minutes of the Jayhawks 74-63 loss to the Mountaineers at the WVU Colliseum in Morgantown, W.V. Tuesday.

The lack of money can buy misery to someone carrying great responsibilities. A surplus of cash can ease stress, but it can’t buy happiness. By Tom Keegan

Tom Keegan: Should KU add some zone defense to its repertoire?

West Virginia was on a mission, Kansas in a fog. That made me wonder if the time had come for Kansas to make a change for the sake of change. Time to shift to a zone defense, just to make the Mountaineers engage the brakes, think, retool. I wondered if the same thought had come across the minds of the coaching staff. By Tom Keegan

Sparsely populated at the start of Tuesday’s West Virginia-Kansas University basketball game because of a snowstorm that turned major highways into skating rinks, WVU Coliseum was close to full by the end of the Mountaineers’ 74-63 victory over the Jayhawks. The perseverance on the roads paid off for the WVU fans, who witnessed history as their No. 11-ranked (15-1, 4-0) Mountaineers beat a No. 1-ranked team in Morgantown for the first time since 1983. By Gary Bedore