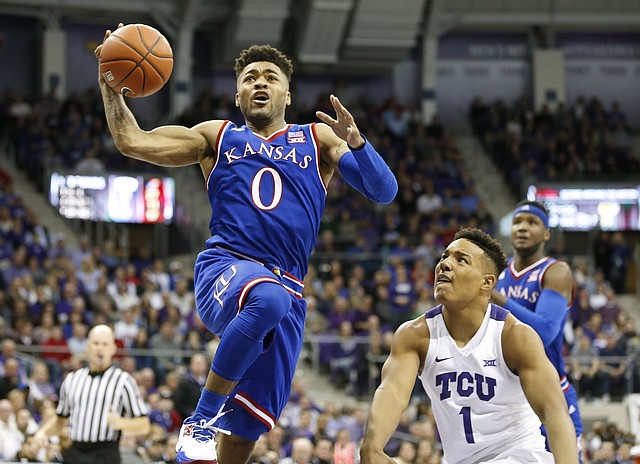 Kansas guard Frank Mason III (0) elevates to the bucket past TCU guard Desmond Bane (1) during the second half, Friday, Dec. 30, 2016 at Schollmaier Arena in Fort Worth, Texas.

Make it two for two for Kansas senior Frank Mason III, who on Sunday morning was named the 2017 recipient of The Naismith Trophy, one of the most prestigious honors given annually to college basketball’s best player. Mason capped his wild weekend by adding the NABC player of the year honor Sunday night. By Matt Tait

Make it two days in a row of making history for Kansas senior Frank Mason III, who on Friday was named the winner of this year's Oscar Robertson Trophy given out annually to college basketball's player of the year by the U.S. Basketball Writers Association. By Matt Tait

Because he plays with such tenacity and never shies away from attacking the rim, it may have been hard to spot. But Kansas senior Frank Mason III flipped a switch a few minutes into Friday’s 86-80 victory over TCU that may have saved the Jayhawks.