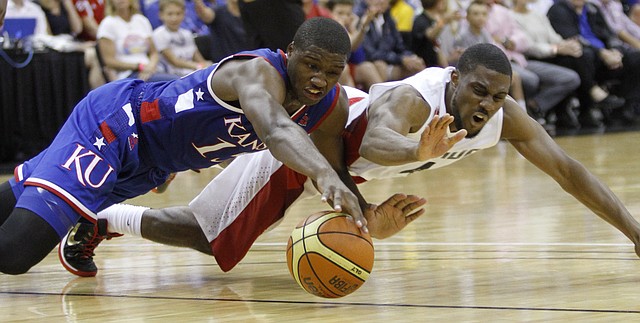 Kansas forward Carlton Bragg, left, hits the floor for a loose ball with Canada guard Jarred Ogungbemi-Jackson in the first-half of a Team USA exhibition game against Canada Tuesday, June 23, at the Sprint Center in K.C., MO.

When the World University Games stretch of basketball started for Kansas University at Sprint Center with a pair of exhibitions vs. Canada, Carlton Bragg was getting tossed across the lane by a Canadian post player. No whistle. Hello basketball vs. men. Goodbye basketball vs. boys. By the end of the South Korean experience, Bragg was diving for loose balls, giving no thought to protecting his broken nose. It didn’t take him long to get the hang of it.

Kansas University men's basketball coach Bill Self confirmed to the Journal-World's Bobby Nightengale and Mike Yoder in South Korea that freshman forward Carlton Bragg broke his nose during the team's trip to represent the United States in the World University Games.

The first thing that stands out about Carlton Bragg, the McDonald’s All-American out of Cleveland in his freshman season for the Kansas University basketball team, is his height.