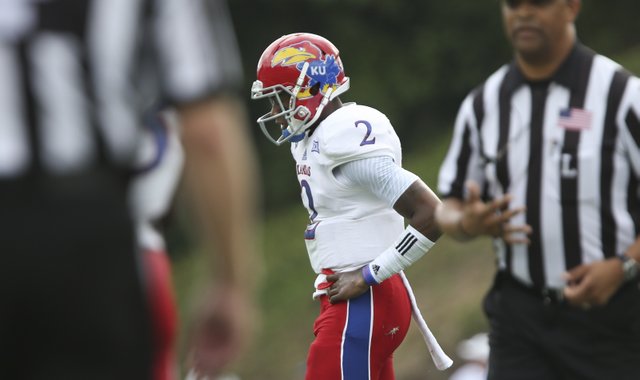 Kansas quarterback Montell Cozart reacts after a turnover on downs by the Jayhawks against Duke during the first quarter on Saturday, Sept. 13, 2013 at Wallace Wade Stadium in Durham, North Carolina.

Based on how raw Montell Cozart looked Saturday in a 41-3 loss to Duke, next season’s opener against South Dakota State could mean the seventh season in a row with a new starting quarterback. By Tom Keegan

Column: It's time for Cozart to show off his speed

Montell Cozart needs to start using his feet, even if for no other reason than to give punter Trevor Pardula’s left foot a rest. Cozart, a sophomore from Bishop Miege High who came later than most to the quarterback position, is fond of saying he’s a pass-first quarterback who will run when he has to run. By Tom Keegan