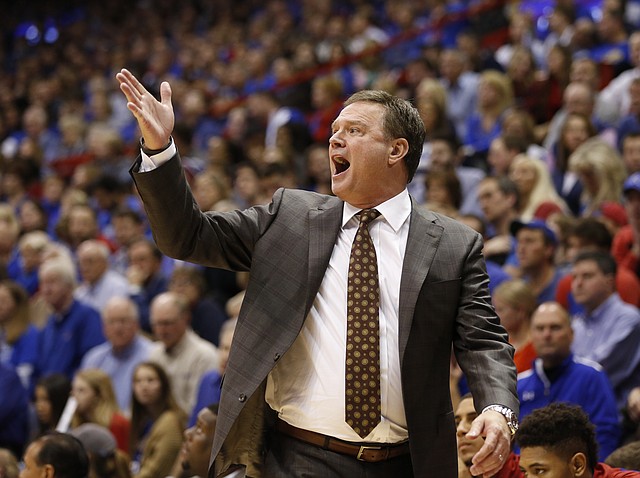 Self draws recognition from Hall for Assists venture

Bill and Cindy Self’s Assists Foundation has assisted many individuals in the state of Kansas since its humble beginnings in 2006.

Self: LeBron on fire, but ‘I’ll take Warriors’

The Golden State Warriors enter the 2015 NBA Finals as heavy favorites to conquer the Cleveland Cavaliers. Lest gamblers be tempted to bet their entire bank accounts on Stephen Curry’s Western Conference champs, they might be reminded four-time MVP, two-time NBA champion LeBron James is healthy and raring to go for the Eastern Conference champion Cavs. By Gary Bedore

The NCAA made a series of changes to men’s college basketball two seasons ago in an attempt to boost scoring and reduce physical play under the basket.

Jayhawks to begin quest for another Big 12 title

Self: Jayhawks can finally turn attention to Kentucky

With a 10-point opening-night victory over a veteran UC Santa Barbara basketball team in the books ... “Now we can talk about the Wildcats of Kentucky,” Kansas University coach Bill Self said after the Jayhawks’ 69-59 victory on Friday night in Allen Fieldhouse.

Self reacts to Larry Brown's comments about UK going unbeaten

The Kansas University men's basketball team next will meet Kentucky at approximately 8:50 p.m., Tuesday at the Champions Classic in Indianapolis. SMU coach Larry Brown, who is mentor of both KU coach Bill Self and UK’s John Calipari, this week captured headlines when he said Kentucky’s ultra-deep team should go “45-0.” After Friday's victory, Self reacted.