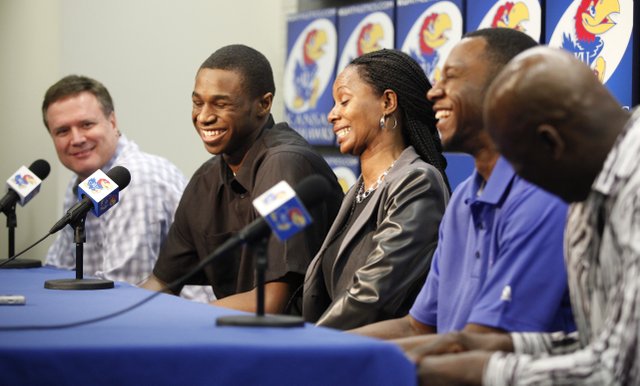 Kansas guard Andrew Wiggins laughs with Jayhawks' head coach Bill Self after Self made a joke about how he could still come back during a news conference in which Wiggins declared his intention to enter the NBA Draft on Monday, March 31, 2014 at Allen Fieldhouse. To his right are his mother Marita Wiggins, brother Mitchell Wiggins Jr. and father Mitchell. Nick Krug/Journal-World Photo

Bill Self says 2-year rule just fine with him

If first-year NBA Commissioner Adam Silver and the league’s Players Association ultimately agree on a new “two-and-done” rule, there actually will be some contented college freshmen and sophomore stars. By Gary Bedore