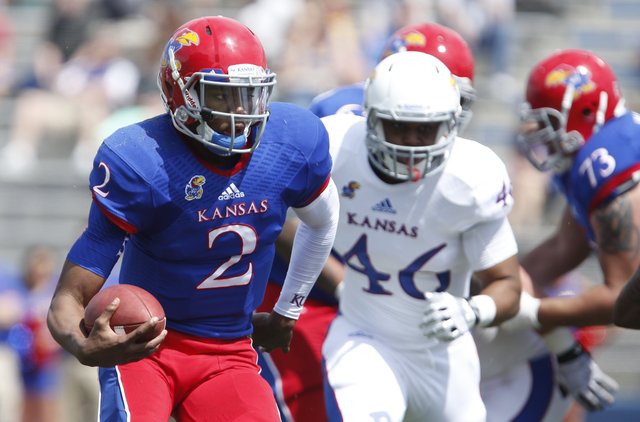 If the Kansas University football team had the Hogs, the famous line of the 1980’s fielded by the Washington Pigskins, then Jake Heaps might have emerged from the spring as the starting quarterback. By Tom Keegan

Weis: Reveal of KU's starting QB all about timing

Five days after naming sophomore Montell Cozart his starting quarterback for the 2014 season, Kansas University football coach Charlie Weis shed some light on why he chose to call off the race at the end of spring drills. By Matt Tait

Thursday morning, KU coach Charlie Weis announced in a press release that the sophomore Montell Cozart's body of work this spring was impressive enough to land him the Jayhawks' starting quarterback job for the 2014 season. By Matt Tait

Saturday’s Kansas University spring football game, between the first-string blue squad and the best of the rest on the white team, featured more than a few head-scratching moments in front of roughly 8,000 fans at Memorial Stadium. While the blue team rallied for a 20-10 victory after trailing 7-0 at halftime, perhaps the biggest shocker came on the first score of the game. By Matt Tait