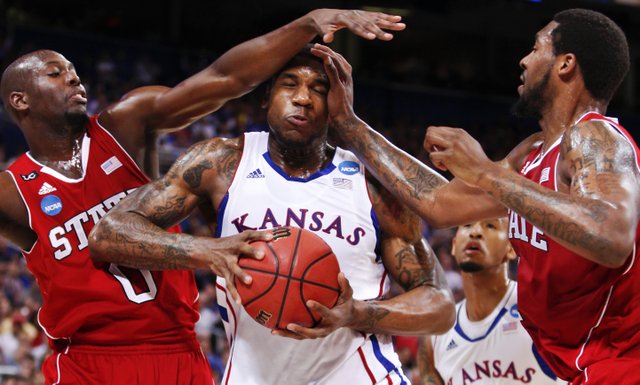 Kansas forward Thomas Robinson gets some contact from North Carolina State forwards DeShaun Painter (0) and Richard Howell during the first half on Friday, March 23, 2012 at the Edward Jones Dome in St. Louis.

So how many players who compete in games for KU this coming season will play in at least one NBA game? Six.

Kansas University’s basketball team smoked one of the schools on Tobacco Road — North Carolina State — on Friday night in the NCAA Tournament’s Sweet 16. The Jayhawks’ 60-57 victory over the Wolfpack before 23,964 fans at Edward Jones Dome — made possible in large part by the fearless shot-blocking prowess of junior center Jeff Withey — now sets up an Elite Eight clash on Sunday against a more-renowned team from the Triangle.

this looks like a 3 Stooges scene. When did this happen, and was it called?