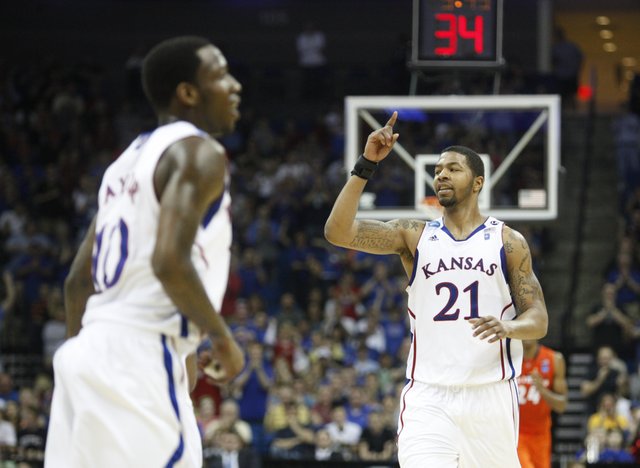 Kansas forward Markieff Morris twirls his finger for the "wrap-up" signal after an alley-oop dunk against Illinois during the second half on Sunday, March 20, 2011 at the BOK Center in Tulsa.

Former University of Arizona forward Derrick Williams, who is expected to be selected No. 1 or 2 in the 2011 NBA Draft, has received no ringing endorsement from Kansas University’s Markieff Morris.

Kansas University’s offense was stagnant toward the end of the first half, and KU coach Bill Self told his players he believed he knew why.

Wow, who writes the captions for these pics? That's Markieff's signal for "wrap-up", meaning the game is over. Read Jesse Newell's article after the Boston U. game.

Fixed. Thanks for the heads up.

its starting to catch on with fans.... after Kieff did that they showed some old dude in the stands doin it.... it was great! on to the Alamo Dome!