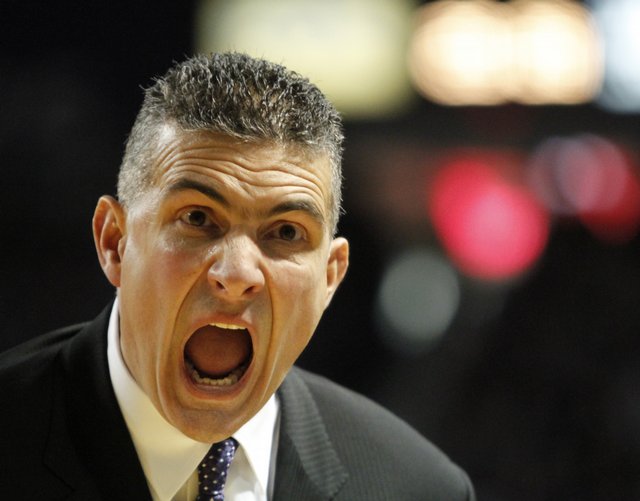 Kansas State head coach Frank Martin screams at his bench during the first half Saturday, Jan. 30, 2010 at Bramlage Coliseum.

Kansas State’s basketball team halted rival Kansas’ 55-game homecourt win streak on Jan. 30, 1988, in Allen Fieldhouse. That incredible stretch ranks as the third-best in Jayhawk history. At 7 tonight, the No. 5-ranked Wildcats (24-4, 11-3) are in town hoping to put an end to the Jayhawks’ current 58-game streak, which is just four games off the school-record 62-gamer set from 1993 to ’98.

Following Kansas University’s 81-79 overtime victory over Kansas State, many Wildcat fans might have wondered why KSU didn’t opt to foul the Jayhawks late in overtime.

Frank Martin needs to get a life. Face it K-State will never have the talent KU has. Martin's is an egocentric A-HOLE and he really thinks he's something. Bill Self has class and is in a class all his own. Bill Self has a professional stature in the way he handles himself whether it be in front of a crowd or with his players. Martin has this negative attitude image of its all about me and I am better than anybody. He does not have a humble bone in his body. Martin you will always be chasing KUs tail and you will always have to pass through KU to get to Manhattan. Just think about that you errogant A$$.

I'm a die hard Jayhawk fan. I was born the year they won the championship in 1988, I cried in 2003 when Michael Lee had his shot blocked by Warrick and we lost in the championship, and I almost fainted in 2008 when I witnessed one of the greatest Kansas games I've seen in my lifetime as they beat Memphis. I love Kansas University with every bone in my body.

But, I am going to have to disagree with you here. I lived in Manhattan from 1997-2003, and then moved back there last year and worked with some friends. We ate frequently at Carlos O Kellys there where Frank Martin does his little weekly bit on talk radio. I spoke with Frank Martin in person and he is one of the most loyal, respectful, hardest working people I've met. His little rampage that he goes into during games is mostly for show. It in no way reflects the soft spoken man that he is off the court. I've seen him with his family and I am good friends with Victor Ojeleye and I have heard nothing but praises from everyone close to him.

Despite the fact that he has finally brought us a Kansas State team that is worthy of calling itself Our rival.

Frank Martin is good for the Big 12 and lets hope to God that their AD pays him so he will stay for a long time.

If he sticks around, I think he'll follow the "tradition" of Storm'n Norman, Billy T(ubbs), etc., as a coach we love to hate. He makes it so easy.

Indeed. "Sit down, Frank!" has a nice ring to it. Love the photo.

I really have nothing against Frank Martin. He's a little crazy, but a decent person and coach.

That being said, does anyone else think he looks like Bert from Sesame Street?

Frank is a good coach, but he is going to blow a blood vessel at this rate