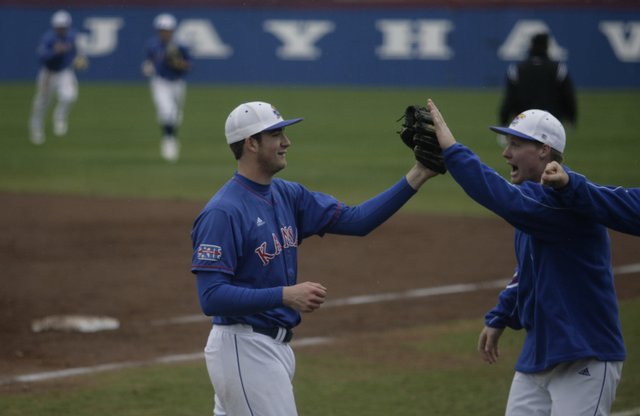 Kansas University pitcher Lee Ridenhour, left, leads the Jayhawks off the field after pitching out of a bases-loaded jam against Oklahoma State. The Jayhawks beat the Cowboys, 4-3 in 10 innings, on Sunday at Hoglund Ballpark.

For five innings of the Kansas University baseball’s team’s matchup with visiting Oklahoma State on Sunday, Lee Ridenhour had done so well. For five innings, the freshman right-hander had stood on the mound at Hoglund Ballpark and — despite suffering from a brutal bout of food poisoning he’d had since Friday night — managed to gut through what would end up being a 4-3, extra-innings victory over the No. 17 Cowboys.